He slept through the night.

For the first time, since he was born, he slept longer than four hours. Four hours was his previous achievement. That four hours? Incredible. Indescribable.

But a night? A whole night?

When he woke, he popped his fuzzy little head up. He rubbed his eyes with his tiny little fists. A look of wonder rushed across his little fat face. Even he was surprised he’d managed to sleep. All night.

My husband and I woke disorientated and comically bewildered. How could it be morning? We were due at least three to six wake-ups over the seven hours we class as “night-time” slash “lose all hope and will to live time”.

The Ham giggled. He flung himself backward onto the bed and dissolved into fat, ridiculous chuckles that turned into absurdly loud shrieks of laughter. While we stared in amazement until we all gave in and fell into the moment too. All of us howling, tears pulling at my eyes as I pulled the battery from my phone – surely the time was wrong. My husband peered out the window “It’s morning?”

The Ham had finally achieved what we thought was the unachievable. It had taken him 13 months. And oh, those 13 months, waking every 45 minutes, screaming for hours while we rocked and sang and hissed and cried and cried. There were torn nipples. Whispered fights “IT’S YOUR TURN!” Sleep apps that we had to stop using because I couldn’t handle my day knowing for sure that I’d had only two hours and 45 minutes – broken so very broken – sleep. There were moments when I really wondered what the Hell I had done to deserve a child that hated sleep. In my worst moments, those 4am desperate moments when you know your other child will be up soon, and you STILL haven’t slept – I thought about running away. Far.

How can we, how did we, how do we, keep doing this? Day in? Day out? Each night I felt as if I was staring out at the sea from a steep and ragged cliff-top. I felt so lost. So guilty. So confused. There were some nights where I cried buckets even before I climbed exhausted into bed.

I have never, in my entire life, even in my first born’s first year, wanted sleep as much as I wanted it near the end of this 13 months. Needed it. Desperately. I would have traded anything. Anything.

I had begun to feel like I was fraying at the edges. Little bits of me kept catching on things and I was becoming less of myself every day. Sleep deprivation does that. It steals from you and you don’t notice at first. You’re surprised by how well you’re coping. You make comments about how it’s amazing that you are getting by and doing so much. But you catch yourself running into the kitchen and you can’t remember what you went there for. Or you get home from the supermarket and you’ve forgotten the one thing you went there for. They’re the little things. You laugh them off.

But then it’s the bigger things. You start to feel as if you’re living in a fog. You retreat. You keep getting sick. You hurt a lot. Your bones and your heart. In the evening, you find yourself sitting down for a minute to collect yourself but then you look at the time and you’ve been in that one spot, staring at the wall, for almost an hour.

You don’t know where time goes. But every moment is waking.

I have been accused of being melodramatic about sleep. Told parenting is tiring.

Why did I have children if I couldn’t cope with a change in sleeping patterns?

There’s no point trying to get someone to understand the sleep deprivation many parents have with their child in that first year, or more. There’s no point.

You know or you don’t know. Some people are blessed with babies who sleep 10 (sometimes even more) hours a night. For most of my son’s life I have lived on around 20 hours sleep a week. Sometimes more, usually less.

This is not unusual.

People like to pretend it is. It makes them uncomfortable so they suggest it’s not really happening. If it is – it’s the fault of the mother. She’s not trying hard enough to get her baby to sleep. She’s not having naps. She needs to put herself first. She’s not practising self-care. She’s a martyr.

All of the judgements and assumptions and ignorant comments sit at the bottom of a clifftop. Above are countless mothers who stand and face the roaring waves each night and say:

Tomorrow is another day

And it won’t. And when I’m on that clifftop, I’m not alone. And neither of you. This chorus in the night is one we share. We are together alone in this. It won’t always be like this and we will get there together.

One night you will kiss your baby’s sweet little face – expectant and full. A little moon peering out in the darkness. You will kiss them and silently wish or maybe you’ll be too tired even for that. You’ll fall into sleep – maybe easily, maybe it’ll take a while.

And you’ll wake up in the morning after they’ve slept all night.

Hours of blissful sleep that will sustain you until it happens again.

You’ve got this mama. You’re not alone on the cliff top. You’ll make it. I know you will. 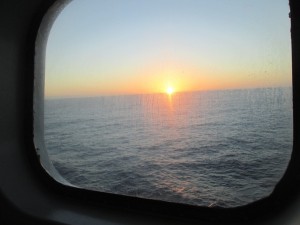 ← One day your kids will grow up
GUEST POST: Two babies, two years →

14 Comments on “A whole night”