Oh thank you for the nice things you said about my interview with Kim Hill. Kim Hill! It was so exciting I have to tell you. I was basically almost mute until we went on air because I was just like

I mean she’s a legend. The best. And I was a bit (like very fucking) intimidated. And worried I’d swear. And worried I’d say something about my vagina or something really terrible. All in all I just said tits, shit, and that we should genocide old white men. So it was fiiiiine.

And everyone has been very nice about it. So thank you.

And after I was like BE COOL EMILY and so I just said CAN I HAVE A SELFIE which is decidedly uncool but I am going to put it in a frame by my bed (probably not I am so lazy I haven’t printed one photo of my almost two year old child but he does look like my first child so I can just say they’re the same kid right??)

Anyway, this post is meant to be an update. Someone said to me the other day – You haven’t written anything in ages and I was like THE FUCK I have written heaps mate. I didn’t say that actually I just made a soft groaning noise that I hope indicated my despair that they weren’t going to The Spinoff Parents.

Yes, I’ve become a Spinoff shill but wouldn’t you? Wouldn’t you? They’re letting me just do whatever I want running rampant and I’m getting sent the most amazing pieces of writing and I am really enjoying it. I have always felt like THIS PLACE HERE – I’m talking about Emily Writes Dot Co Dot NZ was just very up my own ass. I tried to do guest posts but I couldn’t pay people and that made me feel really stink. But I don’t have advertising on here (I’m sponsored yes, but that’s not the same) so I usually run this place as a loss. And before you get at me – I don’t have advertising on here because I don’t want vulnerable exhausted mums to be suckered in by quick loan companies or be harassed by terrible get your baby body back weight loss bullshit. So I’d rather just not.

ANYWAY ANYWAY – so I couldn’t pay people so I was sending people to places like The Spinoff anyway and this place was just very me-me-me which is not good. Not good for me. Not good for you. There’s more than enough miserable white mummy bloggers out there and I just thought I wasn’t offering much with this lack of diversity of opinion and perspective and uh actual diversity.

And then the Spinoff Parents was born and I love it so much – I get to work with writers and mums who think they aren’t writers but who are definitely writers who are much better than me. With them I get to bring stories into the world that are unique and important and vital and not just god I’m so fucking tired am I what. So I hope we can keep it going (I hope – please click on the stories, join Flick, and share and like the page on Facebook so I can keep my job!)

Honestly join Flick – they’re supporting SO MANY WRITING MUMS AND DADS by sponsoring The Spinoff Parents section. And I think it’s important to have a parenting section that isn’t terrible clickbait – a section that challenges and doesn’t treat parents like they’re brainless fuckwits.

So here’s some of the stuff I’ve written recently (just to prove I have written stuff). Yes, it’s not high-brow that’s what all the other content is – the best stuff is by other writers. But hopefully it will make you laugh.

I also spoke at a very life-affirming and special event to mark Perinatal Awareness Week 29th October-6th November 2016. It was organised by the amazing folks at Perinatal Anxiety and Depression Aotearoa. It was really just beautiful to get to meet so many amazing women and support such an important cause. I’ve written before about my depression and anxiety. And we’ve had posts at The Spinoff Parents about going back on meds, dads having depression, and what it feels like to be a mum with anxiety. It’s a cause that will always be really close to my heart so you can expect to see more of that at The Spinoff Parents. We need to talk about it. We really do. 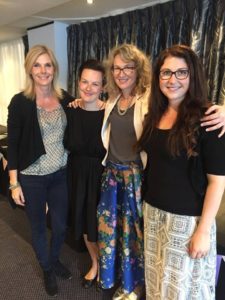 Jude,me,Leah,&Maria at the PADA event

I am speaking at Lit Crawl this weekend which is HOLY SHIT a real writer event thing Jesus I’m nervous. You can come I’d really like that. My event is Tots and it’s at EKOR BOOKSHOP & CAFE, 17B COLLEGE ST.  With me will be the actually amazing Toby Morris (Pencilsword) and the also actually amazing Brannavan Gnanalingam (author of A Briefcase, Two Pies and a Penthouse, and new father).

I’m also going to be Quizmaster at the Wellington Women’s Boarding House big fundraiser quiz on 24 November. You should totally come it will be SO FUN. Tickets include dinner – and a fancy as shit dinner at that. Get a team together and get tickets here. It’s a really good cause.

Other things I’m doing with my life:

TLC on Thursday heeeeyo with my bestie Sarah – last time we went to a concert we got shitfaced and ruined Elton John for everyone. I have told this story before but many years before I had kids I went to see Blondie and The Pretenders and there were all these middle aged women who were just fucking rat-arsed. It was unbelievable. Worse than the Sevens. And I saw this woman take a shit on the grass. ON THE GRASS. And I remember thinking – Holy shit what is this twilight zone. And Now I know – they had a baby sitter so they were gonna make it count.

I won’t shit on the ground outside TSB after TLC I actually can promise you that.

Grease Sing-a-Long on Friday – I’m going with my best girls Gem and Chris and we are dressing up. *clicks fingers*

Oh and just casually: I finished my book. GOT DAMN. I made it. I made it. So that’s why I am going out two nights in a row – to celebrate hanging on to my precarious mental health by the skin of my teeth and actually being in sight of the finish line for my book. 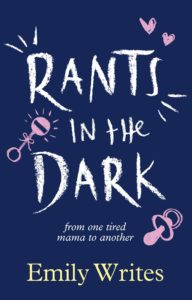 It has my name on it and everything

And nobody has jumped out and said APRIL FOOLS BITCH NO BOOK FOR YOU.

It’s still on the website so that means they’re still selling it.

In other news, I narrowly avoided a nervous breakdown and have recently begun venturing outside of my house again.

Eddie is adapting to a big loss in our family. His first understanding of death (he didn’t quite understand our dog died I don’t think – now he understands, and thinks everyone is going to die). It has made him anxious and it has broken all of our hearts. Listening to him say “I feel like I will be big sad for all my life” feels physically painful. I try to tell him he’s got such a big life. I want him to believe and understand that it won’t always hurt like this. And of course then he’s blowing bubbles or digging in the sandpit and he’s fine but inevitably come bedtime it’s a raw wound again and we all hurt so much – on repeat. Because he closes his eyes tightly and says Aunty are you there? Because she cuddles him in his dreams he says.

So life is that usual mess of devastation and perfection and everything in between and I’m jumping hurdles. Delight and wonder and gratitude makes me get back up again and again and again. That’s all we can really do isn’t it?

Life a bit too special to be a bystander and that’s what I’m learning. We have to believe what we tell our kids. We have such a big life. Fragile though it is. It’s ours. We must make something of it.

Anyway, I am always grateful for your support. I am also mostly on Facebook so you should come and say hello to me there if you like, I’d like that.

4 Comments on “An update”