Closed to be open

I am currently writing this sitting hunched over my laptop at my mother-in-law’s house (I don’t publish my posts straight away – I spend a bit of time making sure they’re not going to upset anyone so this isn’t right now….but that’s not the point). After a year of not sleeping longer than three hours, drastic measures have been taken. My husband has the baby at home, and I’m with my big boy at Nanna’s. We are weaning.

It’s earlier than I wanted. Breastfeeding was hard fought for and I imagined I’d do it until baby decided he didn’t want anymore. But reality has set in, and as I’m on the verge of a breakdown from literally never sleeping, we have realised we have to do something.

So here we are. My baby’s desire to feed all through the night every night has been something we have accepted for a long time, but now it’s starting to impact my health so for the last few months we’ve been trying to change things. And nothing has worked. Feeding only during the day hasn’t worked. Feeding only at night hasn’t worked. Having daddy bring baby into our room hasn’t worked. Having baby sleep in bed all night with me feeding whenever he wants to be fed works for him – but it doesn’t work for anybody else in the house.

And forced weaning isn’t what I wanted to do. My parenting style – if I have one – is exceedingly gentle, child-led, and often the path of least resistance…What we are doing feels like it goes against the way we want to do things, even if we are doing it in the most gentle way we can.

But this is the reality of parenting isn’t it? Sometimes what one wants doesn’t work for the other three (or four or six or however many are in your whānau). And balancing our family of four is something we strive for – everyone’s vote counts equally. It’s a struggle sometimes to make sure everyone is being heard and quite frankly, I often find myself at the bottom of the pile.

It was my husband who finally put his foot down and said we need to focus on me for a bit. I need sleep. Even if it means that short term he won’t get sleep and baby won’t get sleep (to be fair baby rarely sleeps so whatever kid).

Prioritising is hard for a lot of families. I’ve spoken to so many mums who are so close to burnout because the order of the house is everyone else’s needs then maybe, if there’s anything left over, them.

I had to wait until my husband and mother-in-law said “enough” and I was too tired to argue. But I’m glad they did step in. I’m glad they noticed and recognised I wouldn’t be able to say it myself. I’m grateful they could see the internal struggle I was having – and I’m so thankful they decided to do something about it.

And even though my heart feels heavy, just one night of sleep has helped me clear the fog in my head. 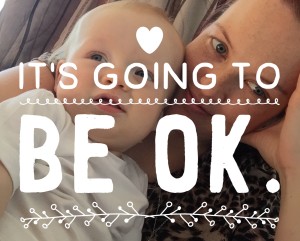 I needed and deserved sleep. And my little milk-obsessed baby is actually a resilient, one-year-old fatty who will also get through this just fine even if he doesn’t like it. I just need to keep remembering that. And, like a mantra, keep telling myself that I matter too. That I need to be healthy to take care of my beautiful babies. That I can’t be the mum I want to be if I hit a wall. That all the parenting philosophies and good intentions and plans on how I want to handle things aren’t worth a dollar if I can’t function properly.

I am imagining my cheeky monkey right now snuggled up with his daddy – sleeping peacefully despite the milk bar being closed.

← The night I was an unlocked car
Who will you be? →

21 Comments on “Closed to be open”