I’ve written before about how much I like Baby Banz so I was stoked when a package arrived from them a few months back. Eddie went absolutely batshit when he saw that they had sent him sunglasses.

I was less enthused than he was (which frankly isn’t difficult – the kid loses his mind over things like a piece of luncheon or another piece of luncheon). Eddie loves sunglasses but he manages to break them all in five seconds and then I never hear the end of it. I feel like I spend a lot of money on cheap sunglasses from Uncle Bills or on sale from The Warehouse because I am always replacing broken glasses.

As I watched Eddie ripping them from their packaging I thought – awesome, these are going to be broken before he even puts them on. And then I’m going to have to buy him more.

He pulled the arms  (do you call them arms?) of the sunglasses and in my head I conjured up images of the glass of wine I was going to drink at exactly 5pm to the second – when he said “LOOK DEAR MAMA THEY STETCHY” 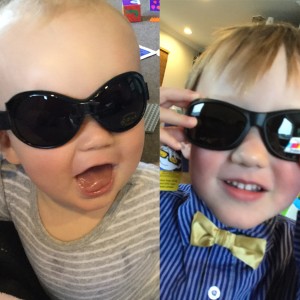 It turns out they’re a new brand Baby Banz is stocking called JBanz Flexerz which are made from rubber and are polarised. The arms and frames literally blend and flex.

So they’re basically the perfect sunglasses for kids who drive their parents crazy breaking every single damn pair of glasses they’ve ever been given.

They’re made for ages four to ten but Eddie is three and they are a great fit for him. He loves them and they’ve so far survived in our house for three months. They might outlive our dog who is 800 years old and a total jerk.

I sat on them the other day and they survived that so that basically makes them indestructible in my book. They also come in super cute colours.

Baby Banz also sent Baby Ham some sunglasses and I put them on him and imagined his internal dialogue based on his facial expressions and basically:

Don’t put that on me

I SAID NO DON’T PUT THAT

WOW EVERYTHING IS DARK

WAIT THIS IS TERRIBLE GET IT OFF

DON’T TAKE IT OFF WHAT IS WRONG WITH YOU! PUT THEM BACK ON!

Cons – The soft band was quite disgusting after three seconds of Ham chewing on it so maybe don’t let your kid chew on it if you’re a person who can stop your children doing things you don’t want them to do. Also he looked like he was going to a Steam Punk costume party. And he lost his damn mind the first few times we put them on him. But he is getting used to them and they’re a far better option than glasses that aren’t wrap around which do not even last the time it takes to get a photo and be like how cute is this to put on Instagram.

Ham could still pull them off, but not as easily, and if you keep sticking with putting them on they’ll get used to them – maybe. They also have a soft silicone frame, making them perfect for weenie new babies.

And I do think babies and kids need to wear sunglasses (including in winter for snow holidays if that’s a thing that you do – it’s not a thing that I do because I don’t understand why anyone would go to a place that’s colder than the place where you are because cold weather is awful). So I mean, I did persevere is what I’m saying. In the words of our most famous trumpet eater it didn’t happen overnight but it did happen.

I’m pleased Ham can keep wearing them for quite some time because the headband (designed to keep them on) can be adjusted for growth or for babies who like Ham have been blessed with very, shall we say, generous craniums.

I also used their ear protectors at Auckland City Limits and they were brilliant again! So if you need ear protectors for concerts, you can grab them here. Next month we are taking Eddie to Iron Maiden to meet his namesake (yes, we are those parents) so they’ll be used again. We have also found they’re good for “quiet time” when we are out and about and Eddie is a bit overwhelmed. Might be worth a try if you have a child who can get overtired easily OH THAT IS ACTUALLY ALL CHILDREN #blessed.

Finally, we got some UV Indicators as well in our wee package. Eddie loves them because they’re bracelets and I am not that keen on bracelets (because he breaks them or loses them or leaves them all over the house). I explained to him how the UV indicators work, not thinking too much more about them.

Then a week or so later, Eddie raced up to me and said “MINE BRACENET IS SUNBURNING!” Which was a pretty great translation for “The Banz NZ’s UV Indicator range changes colour as UV rays are absorbed. The centre of the UV Indicator gradually darkens to reflect the increasing ultraviolet intensity of the sun. That has just happened to my Banz NZ UV indicator so please dear mother who has sacrificed her body and her ability to drink wine before 5pm for me – please also reapply my sunscreen”.

Incredibly, Eddie then got the sunscreen out and ASKED ME TO PUT IT ON HIM. Yes, you heard that right – A THREE YEAR OLD ASKED THEIR MOTHER TO PUT SUNSCREEN ON.

Usually trying to get Eddie to put on sunscreen is akin to trying to get Bob McCroskrie to not comment on something that has nothing to do with him (topical!). It’s like trying to get me to not drink wine the second it’s 5pm (I have a rule OK to try to stop myself being such a lush).  It’s just not a thing that can actually happen.

So now I am this mum who I found by searching “Happy Mom reuse don’t sue me” on Google Images. Look at how happy she looks? I bet she is thinking about 5pm. 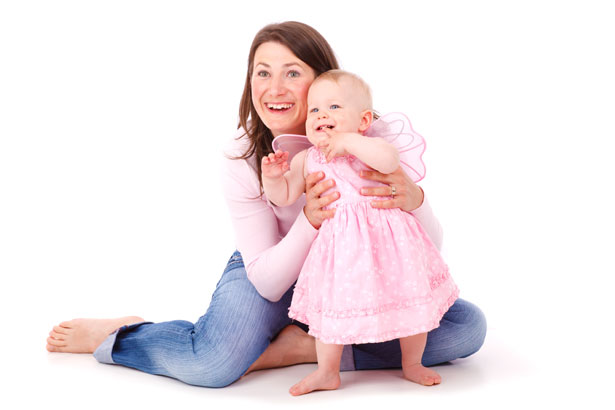 I was also sent some onesie extenders by Onesie Bummsie. Which frankly is a rather delightful name for a wee business. It’s a great NZ-Made product that does what it says on the box.

I have used the extenders they sent me and they’re great at extending onesies (I mean really, I am not a good enough writer to make this interesting).

Eddie is long – the tallest three year old I’ve ever seen basically – so I plan on really thrashing the Onesie Bummsies (delightful!) when we hit winter. Because he can still fit his winter thermals in the arms but he’s too long to clip them them. I was going to just go full bogan and cut off the bottom of the onesie, send him to kindy and hope nobody notices, but instead I’ll now be able to just use the extender.

If you purchase them directly from Onesie Bummsie, they offer a 30 day money back guarantee.

I went on their website to get some extra info and I found this photo and I’m kind of like – is this magic? Did they drug this baby*? How did they get it to stay so still for a photo?

Anyway, They come in packs containing either three short or three medium extenders. They come in black, white, and a kind of darkish green. You can also buy single extenders.

*I am not suggesting Onesie Bummsie drugged a child please don’t sue me.

The next Dear Mama Likes review will be all about MudMates coveralls. Spoiler alert: They’re awesome. And I might be able to do a giveaway!

Also shout out to BaBU for their super lovely body wash and shampoo that I didn’t realise was for babies and it doesn’t really matter anyway because I have decided it is actually too nice for my kids so I’m just going to continue to use it for myself only and then hide it and give Eddie the probably-poison filled Elsa stuff instead. It’s basically the only thing that doesn’t dry out my skin and I don’t want to share because I already have to share everything and I don’t see why I should have to be mature every single day ok.

If you want to send me stuff to review email me at emilywritesnz@gmail.com I might review it but I’m super busy so please don’t be demanding. kthanx <3