The high pitched squeal Eddie emitted when he saw the Mud Mates coveralls we were sent a few months back basically caused all the neighbourhood dogs to lose their shit. After a couple of months of owning his pink and navy coveralls he’s chilled only slightly, so the dogs are still losing it. 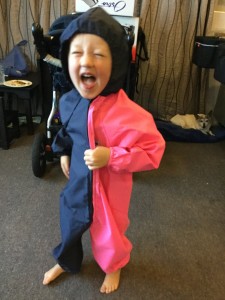 He was a bit excited when he first put them on

The aesthetic is really Eddie. That the all-in-one-suit is in his favourite colour, but only half of his favourite colour, really appeals to him and I’ve had to break it to him that his whole wardrobe can’t be half and half because that’s not a thing. What appeals to me is that I don’t have to do 16 loads of washing every day now. So you can see our views are slightly different…

I’m sorry for the lack of photos. Though to be fair if you want stunning photos  you need to leave here and go to one of the zillions of Instagram mummy bloggers who take beautiful pictures. I do not have that talent and I take photos on my phone. My phone which just fell in the toilet the other week. Like one freaking day after I upgraded it to a smart phone. Seriously. And I pulled it out of the toilet and I dried it with my top and spent the rest of the day at the zoo wearing a top with wee on it. And it never worked again. Because wee and phones shouldn’t be together.

SO – where was I before I talked about putting my hand into a zoo toilet full of pee? I really like the Mud Mates coveralls. I really do. Not just because I like seeing Eddie’s face when he’s wearing them, but also because they’re saving me time with washing and actually for like eight other reasons.

Mud Mates have given me some coveralls to give away which is REALLY exciting. The giveaway runs until midnight Sunday 17th April so make sure you enter! All you need to do is CLICK HERE to enter the draw. The winner has been chosen at random – congratulations Michala. Alana from Mud Mates will contact you directly 🙂