Fear and Loathing in Pontypandy

Sam pushed the door shut against the torrential rain. He steadied himself against his kitchen bench and pulled a bottle of cheap whisky from a brown paper bag. He’d driven to the town next door to buy it – he couldn’t risk anyone here seeing him buy his third bottle in as many days.

His white shirt was wet. It stuck to his hard body. He pulled it off and used a tea-towel to dry the auburn hair on his ripped and deeply scarred muscular chest.

He shivered as he took a gulp of whiskey.

He hated Pontypandy. He hated its’ suffocating drudgery. He hated how everyone called him Fireman Sam.

He wished they’d all just fuck off. He was sick and tired of being the hero next door. He took another swig of whiskey. In his worst moments he thought about just letting the relentless and incessant fires destroy the Welsh town he was trapped in.

They’d be lost without him. They knew it, and he knew it. There had been mutterings at the Pontypandy Times – why was the station run by an incompetent old fool? Everyone knew Station Officer Steele was senile. But would he leave and let Sam take over the station? No, he wouldn’t.

Sam was destined to always be second best to that old asshole. He was destined to spend his days dealing with Elvis and his shit-eating grin. Elvis thought he was Sam’s friend. Sam had once kicked a ladder that Elvis was at the top of and Elvis had sprained his ankle. Everyone said it was a miracle that he didn’t break his back. Sam often wondered if Elvis knew what he’d done.

He had been getting that little prick Norman Price down from a roof. Again.

Sam threw the nearly empty bottle of whiskey against the wall.

But Norman Price kept Sam trapped in Pontypandy. Trapped in a dead-end job. Surrounded by half-wits who kept getting stuck up fucking trees. Nobody in Pontypandy could even cook on a fucking BBQ without setting fire to something.

Sam wanted to be a good father to Norman Price. He tried. He was relentlessly cheery. He paid child support to Dylis and he kept her secret.

Simple Dylis. He still loved her. Even though she had set fire to her fucking shop six times this summer because she barely had two brain cells to rub together. Even though she never shut the Hell up and couldn’t ever mind her own business. He found it simply breath-taking that she gossiped about everyone in Pontypandy when she had the biggest secret of them all.

She’d changed so much over the years. Sam remembered when he’d first met her. It was before she began dying her hair red to cover her secret. He met her in Pontypandy’s only kink bar. It was run by Trevor Evans. He gave it up to be a bus driver and to this day that irritated Sam. The “inventing shed” was now where Sam played out his dark fantasies but he missed The Pont – it annoyed him how the old regulars there had paired off and disappeared into suburbia – Mike and Helen especially. Once he’d made a joke about getting Helen to “patch him up” and she’d told Mike. Mike called and said it was inappropriate. Sam had been furious. The next night after the confrontation he’d shit on Mike and Helen’s doorstep. They’d not looked him in the eye since, but he didn’t care.

Sam closed his eyes and forced himself to remember the moment he’d first seen Dylis at The Pont. Sam had been dressed in a gimp suit so he’d not been able to see Dylis’ full stunning form until he’d fully unzipped his eyes. The gag-ball almost dropped out of his mouth.

She was dressed head to toe in red latex. She had a whip.

He was wild with desire.

That night he’d fallen in love. She might now dress like a woman who has given up all hope – but Sam would always remember that red latex outfit. And the tattoo on her lower back that said “Ride the Lightning” in Metallica font. Sam remembered telling her that actually Kill ‘Em All was a superior record. She’d sneered at him and spat “don’t mansplain metal to me you little bitch”.

She barely resembled that fire cracker of a woman now. The years of having to parent such an abominable child had taken their toll on her.

There was a time when it seemed like Dylis might let Sam into her life again, to try and pull their little mistake into line. But then she’d decided – out of the blue Sam thought – to take Trevor Evans as her lover. She’d told Sam that Trevor Evans was a better father figure than Sam. He didn’t drink, she said.

Yeah, well, maybe he didn’t drink but he got lost every fucking time he went into the bush – even if it was just to go bird watching.

And then who would rescue them? Sam would.

Sam dreamed about leaving them in the bush to die. He was drunk now. And angry.

He knew he needed to be careful. Penny had smelled whiskey on his breath more than a few times in recent weeks. He could still do his job. Fuck it, Sam thought. Pontypandy had a rate of fires higher than any other town in the world. The place was literally up in flames every twenty minutes. Sam knew they couldn’t afford to lose him even if they found him drunk on the job.

Drunk he was still Fireman Sam.

Move aside make way it’s Fireman Sam he hissed into the darkness of his scummy flat.

And he knew Penny would never say a word. He’d caught her in the station bathroom once huffing methylated spirits. She knew that he knew that she was losing it too.

That’s what Pontypandy does. It chews you up and spits you out. It was a wasteland of broken dreams, broken lives.

Sam closed his eyes as he heard the alarm go off again. Another fucking fire.

He gritted his teeth. He began the mantra that had kept him going all these wasted years…

“When he hears that fire alarm, Sam is always cool and calm…”

He put his helmet on and slammed the door.

He looked in the rear-view mirror as he started up Jupiter.

“One day they’re all going to burn” he said as he cranked Kill ‘Em All. 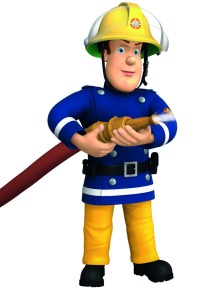 14 Comments on “Fear and Loathing in Pontypandy”