I wrote the review below a wee while back…Since then, I’ve had heaps of queries about Flick and I’ve had a lot of readers say they switched and have saved heaps. As a result of this – I ended up asking Flick if they’d be interested in sponsoring this site. I have been approached by companies wanting to advertise on this site but despite needing the money, I’ve turned them down as I didn’t believe in their product or service. For a while now I’ve been on the look out for an ethical company that supports families and provides a service I would use even if they didn’t pay me. Finally I found one, and I am really stoked they want to partner with me.

I really like Flick. You’ll already know that if you read my first review about them. I’ve now been with them for a few months and I’ve saved A LOT. I want you to save money too, and I want you to support a company that is ethically really cool – and who is supporting me by supporting this site. Click the image below to find out more about joining Flick!

AND LAURA DANIEL OMG WE ALL LOVE HER. *ahem*. Click for Laura Daniel too.

Here’s my review from earlier this year:

If you follow me on Twitter, you will know that I have had numerous rage attacks about power companies in this country. I’ve been through three power companies in four years. If you’ve got kids you’ll know that when you have a family you suddenly have a lot less money (you’re usually at least one income down, or worse if you don’t have a partner). Along with having less money, you have to pay more for power because you have to heat every room your kids are in. Especially in fucking freezing places like…most of New Zealand.

I am sick to death of power companies that increase their prices at the beginning of winter – so they can make the maximum profit from you freezing your ass off. I have opened power bills before and been in tears over the cost. I have sat covered in blankets to try to keep the bill down instead of having the heat pump on. When we had Eddie we kept him in our room so we only had to heat one room in the house. When The Ham came along Eddie was (mostly) in his own room. So while we kept Hammy in our room, we now had to heat two rooms. And the shitty power company I was with raised the price of power right before winter. Despite turning a record profit, they felt they had to charge families like us more. We had to heat the two rooms our kids were in – with a child with respiratory condition we also have always had to run a dehumidifier. We knew winter was going to be bad. Our power company – we will call them Greedy Shit Power – would not budge when I called them and asked them for a month amnesty so I could raise more coin to handle the shock of the new (significant) power increase. Greedy Shit Power called my bluff about moving power companies. I moved to another power company and they were better – but they run on a system that means their winter rate is horrendously more expensive than their summer rate instead of just more expensive than their summer rate. We had to borrow money for our bill from family and it was fucking humiliating and shit.

And then Flick emailed me. They said they care about families. And I was like yeah, yeah OK whatever. But the person I spoke to actually had a family – and she and I talked heaps about what it’s like to suddenly have less cash but have to pay more for power. And how hard that is. And how you feel like a crap parent when you can barely afford to heat your home. And lots of families are far, far, far more worse off than we are. 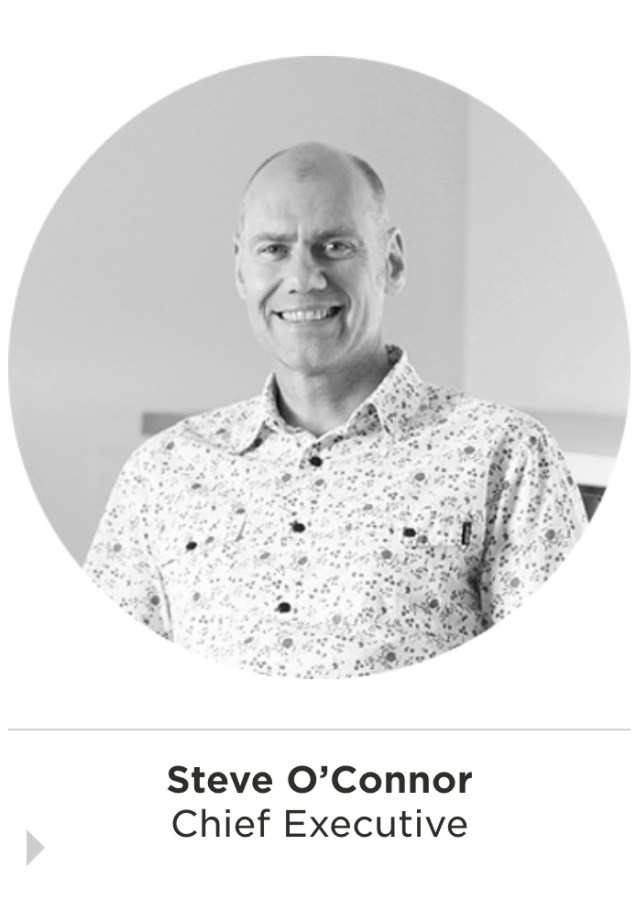 #GoodGuySteve I never thought I’d trust a guy that wears a shirt like that and yet here we are.

Then I talked to the CEO of Flick Steve O’Connor. I mean – a CEO of a power company talking to a pretty unhinged blogger who regularly posts out of control rants about power companies on Twitter is pretty impressive. He wasn’t even scared of me.

We chatted about the basic Flick model and it’s basically this (paraphrased by me because I took notes but the notes are all the way on the other side of the room and I can’t be bothered moving) – Flick doesn’t fuck around (Steve didn’t say fuck, he seems like a chill guy who doesn’t say fuck but doesn’t mind if you say it). They just sell you power direct and they tell you what they’re charging you, so you get to decide if it’s worth it. And they don’t charge you in bulk – they charge you as the price of electricity moves. So if you’re savvy – you can bring down your power bill by using power when the price is low. In their own words:

The market price of power (known as the “spot price”) changes every half-hour. Most power companies charge you a flat rate that covers the ups and downs, but we give you access to actual spot prices on the wholesale market. 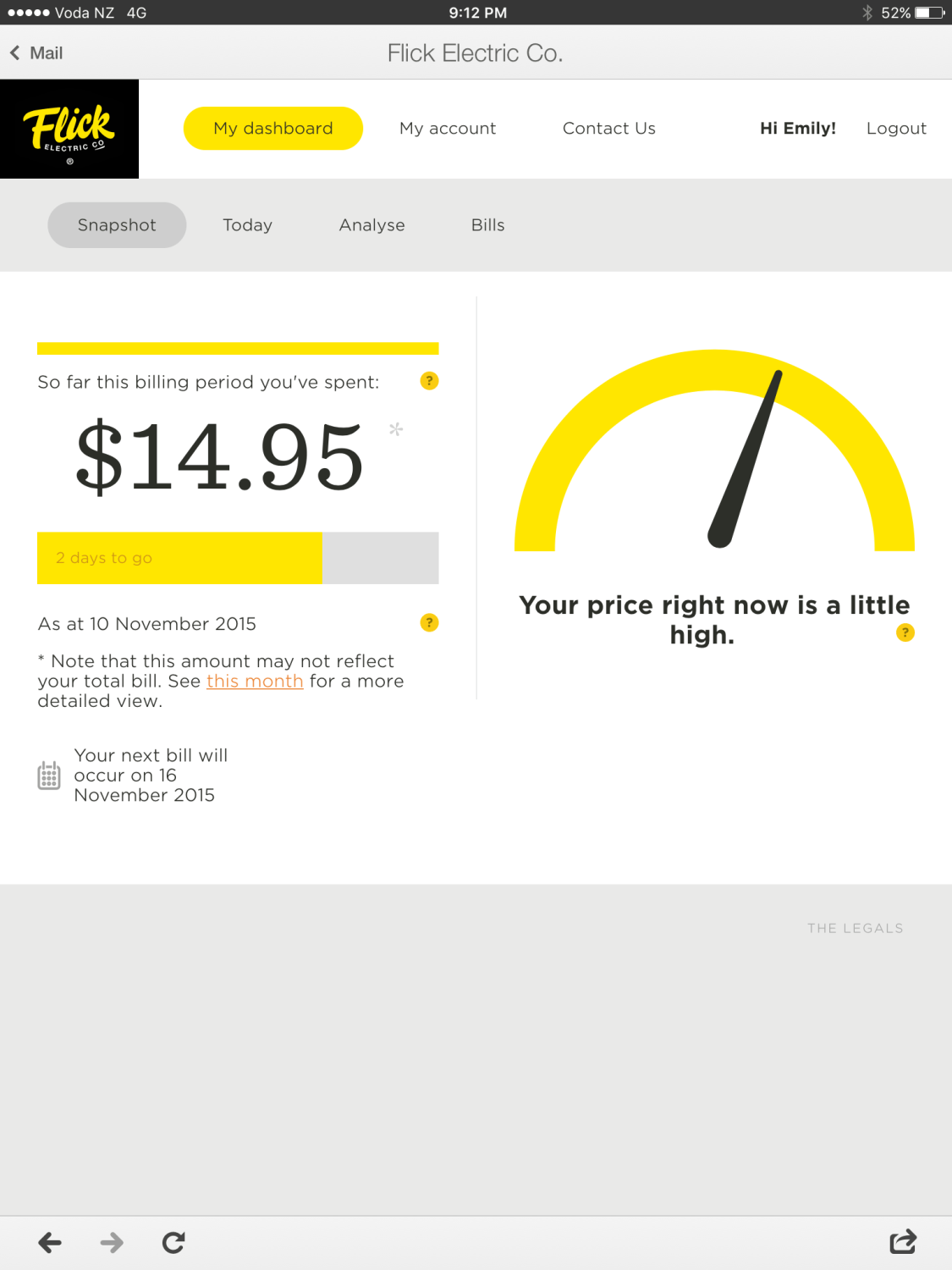 Which, for those of us with one parent at home, is pretty good, because we can turn appliances on or off during the day depending on what the spot price is. Flick has a bunch of info about how to game the system and only use power when it’s at its cheapest.

You’re also billed weekly, and you can see how much you’re using EACH DAY. This gets rid of price shock. At first I was a bit worried about weekly billing – my main worry was that I wouldn’t have enough each week to pay my bill. My husband is a gardener and I work bits and pieces here and there. Our income sucks and some weeks it’s more and some weeks it’s fuck all. BUT – having tried weekly billing for about two months now – it really works. I am actively trying to bring the price down and seeing it go down each week is a real motivator. And I no longer have this sudden shock of a bill at the end of the month.

Pre-Flick – I never knew what I was going to end up with. There seemed to be no rhyme or reason to my bills and it was so bad when they estimated one month and I’d be like “Oh thank God it’s lower” and then the next month it would be “Holy shit how are we going to eat”.

Weekly billing gets rid of that anxiety-inducing bill shock horror. They’re also transparent about why they’re charging you what they’re charging you. Which is kind of hard out for a power company since they’re usually like “that’s just what the power we generate and sell to ourselves costs us when we decide that’s what we are going to sell it to you for”. 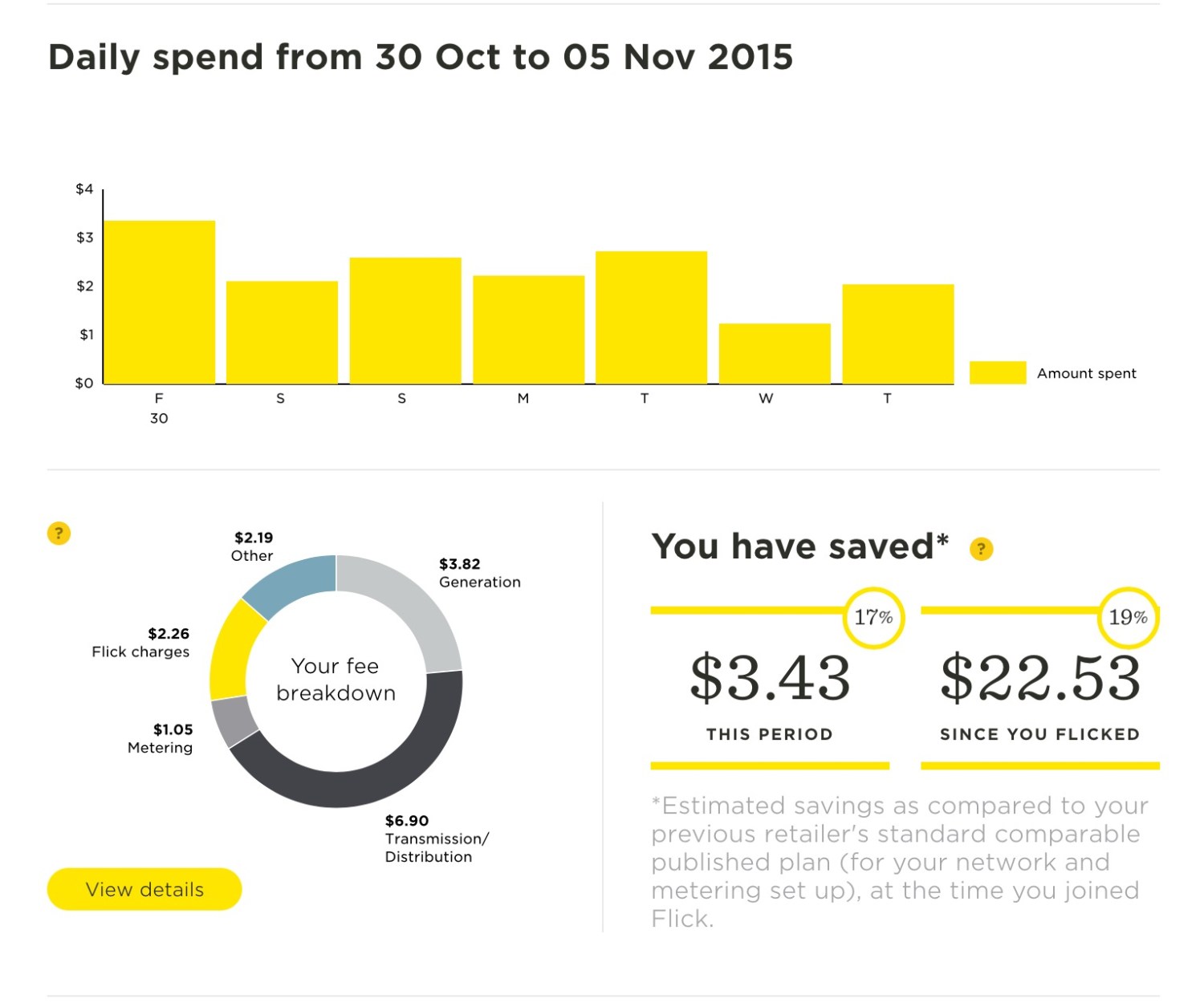 On your dashboard you can see your fee breakdown 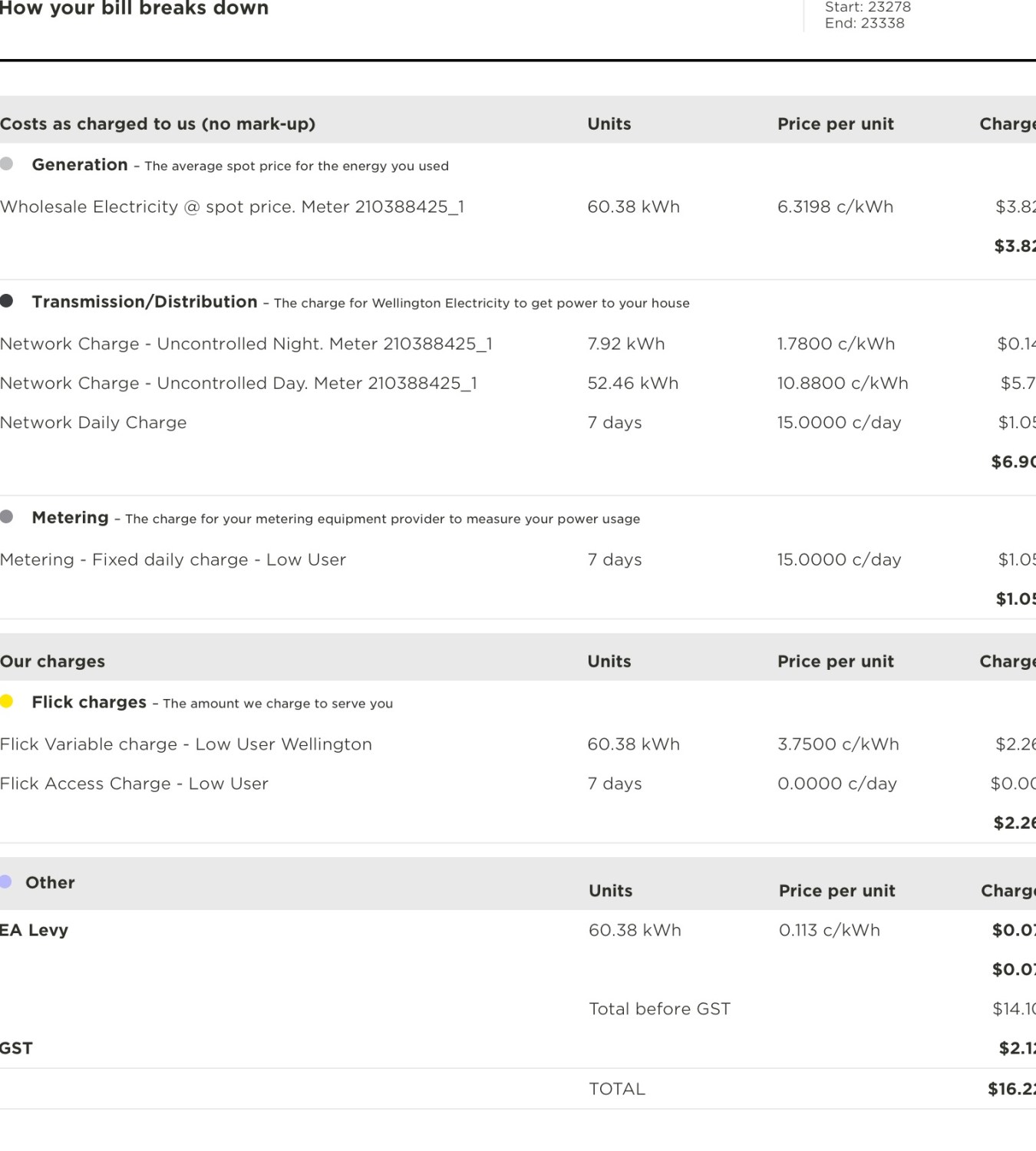 If that’s too simple for you, you can get a more comprehensive breakdown.

I’m doing a six month trial with Flick, and they’ve been good about it – I think it’s pretty brave of them to put their trust in their product and say – write what you want. I’ve had some weird shit with reviewers where they have wanted to write my reviews for me or “check” them. Like, you know what a review is right? Hence why I have done so few reviews I suppose.

Right now, a few months in with Flick – I’m digging it. 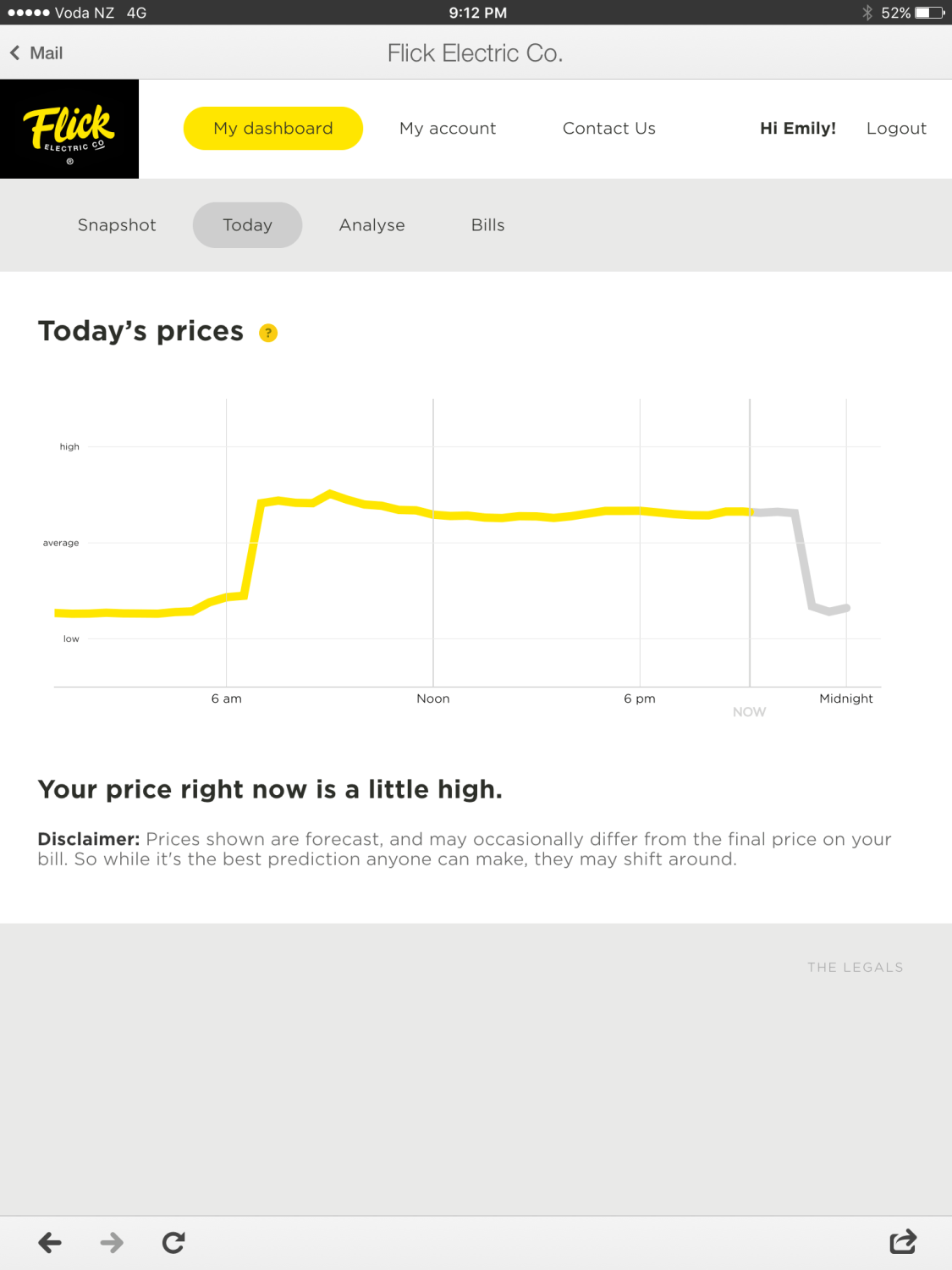 Flick might just be New Zealand’s first ethical power company. And I like Steve. He’s like a Power Ghandi or something. They seem to genuinely want New Zealanders to get a fair deal with their power. He also rang me from his cell phone and said I could call him if I needed anything and like maybe he might come over and baby sit my kids while I go out rampaging/sleep.

Anyway, they have no contracts (see – ethical!) so you can sign up with them to give it a go and if you don’t like them (I think you will – and they topped the Consumer power company ranking thing) you can quit with no issue. You can join online meaning you don’t have to talk to anyone (always a bonus). 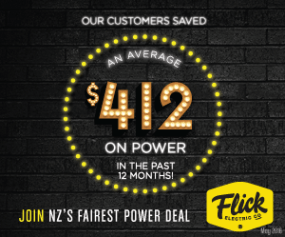