I said goodbye to my friend today.

The longest relationship I’ve had.

I was 10 when I got him. I didn’t like him at first. He looked like a rat. But he slept behind my neck. He used my hair as a blanket. He got rounder but never much bigger.

He went everywhere with me. He was my friend. When I moved to New Zealand he came too and he was my home so I wasn’t so homesick. When nothing felt sure or stable – he was there.

When I felt lost and hopeless trying to find my place in the world he was my companion. I felt as if I always had this funny little friend who would accept me.

When I became overwhelmed with life and it all seemed too hard I often thought – well, he’s still here, I’ve still got my friend.

When I met a very cute boy and moved into my first flat with him – my friend joined us soon after. This boy had never had a friend like this round little thing. They became best friends too. And when we got married our friend was there in the front row.

When I finally, finally got those two lines on a stick – our friend ran around our legs as we hugged. It’s all going to change now we told him. And it did.

One baby who followed him everywhere, then two.

And he was old and tired and he was too little and frail to reach the bed to sleep on anymore. He was moved to the corner. I had less time for him, I didn’t stop as much to cuddle him. He nipped at the kids and he growled and he barked and woke the baby. And we stopped talking late into the night.

And then last night – out of nowhere – he came to me as I was watching TV. He never does that.

What’s wrong? I asked. It had been so long since we’d talked. He lay down at my feet and I lifted him up. He was so light. He rested his little face on my arm. I gave him a cuddle then took him to his blanket. I had a feeling.

In the morning I got up before the children to check on him. His eyes were closed. Then he opened them just as I thought – oh.

He lives, I almost laughed.

He’ll always be there.

I began to get the kids ready, quickly did a bit of work in a stolen moment, then my husband said from the bathroom “hon, something is wrong we have to take him in”.

He had gone into the bathroom and I wonder if it was to hide from the children.

My husband stayed with him, I got the kids in the car, then we carried him in his blanket. I wasn’t sure how he’d react to a car ride, but he was quiet. Calm.

Why is Otis in the car? Eddie asked. I thought back to all of the car trips we had with him, and realised after the children arrived we stopped taking him out. He was to old and always needed to be carried. It was too hard, a baby and this old little thing. So he stayed home. To my son he just never goes in the car – but I’d had decades of him riding on my lap. We had driven all over the country, moved house, beach every day…a long time ago.

“He’s going to see some old friends” I told my son.

As I dropped the kids at kindy I started to cry and I was grateful for a kind teacher. I got back in the car and we drove slowly so our friend could see out the window. He watched the scenery pass and seemed to enjoy seeing the hills and the water one last time. Before we reached the place though he’d rested his head against my hand. His eyes hidden beneath my fingers. We were taken straight through which was a small comfort. Inside a kind man talked us through what would happen.

We both began to sob. I did not expect it to be so hard.

We told him he was such a good boy. We thanked him for being our friend. Always. All these years. A constant companion. We said sorry for how things had changed. I wish we had taken you to the beach more. Tried harder when the babies came. We love you. We do. He just closed his eyes and lifted his head toward us. We scratched between his ears. We smoothed his fur. He went to sleep. And then he was given a final helping hand to leave us. And as we cried that little heart stopped beating and we said goodbye, finally, to our friend.

I carried him home on my lap wrapped in his favourite blankets and that’s how he’s buried. With his collar and lead. Covered in flowers. Ready to run along sand dunes like he used to. To chase butterflies somewhere. Somewhere where there’s lots of crumbs. And no children. And laps to sit on. And a space on the bed.

Tomorrow, if it’s sunny, we will plant wildflowers in the part of the garden that now belongs to him.

As I tucked my babies in tonight Eddie said “was Otis your best friend when you was little?”

“Was he deddy’s best friend too?”

“He was a good best friend” Eddie said. 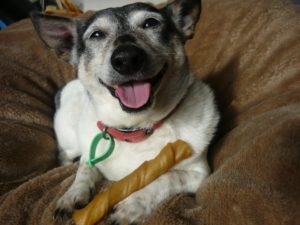