I am really tired.

If you’re reading this and you’re a parent of young children you’re probably very tired too. I wanted to write this though because it’s basically all I’m thinking about right now. How tired I am.

Days are quite foggy. Dull throbbing behind my eyes is normal. I’m often caught staring into space trying to recapture a long-gone train of thought. I try not to snap and keep perky and cheery. But I am honest with my toddler – Mama is tired, I’m sorry for getting angry but I’m just a bit tired and when you’re tired everything is a bit hard. I think it’s important not to hide from kids the reality of…..I don’t know: this life.

Sundays are hard. The week looms ahead and you don’t know how much sleep – if any – is ahead. It feels a bit overwhelming. You want to prepare for the week ahead, have to, but getting off the couch feels like climbing Mt Everest.

It seems a silly thing to write about but gosh, I never realised how tiring this whole parenting lark would be. How tiring it is. Not sleeping of course, that: just falling asleep and then the baby cries out. Or that: finally fallen heavily into dreams and then you’re catapulted out by a toddler touching your face.

Side note – Is your toddler terrifying at night? The other night mine started singing “Where is pinky? Where is pinky? Run away! Run Away!” – TERRIFYING. Like in my half dead/asleep state I do not need to see a shadow in the hall and hear that sing-song tiny voice floating through the house. There are enough people in this house who regularly shit their pants, thank you very much.

Where was I? Tired. Everyone says – you will be tired. And of course you know, this of course you do. But you can’t prepare for it. And three years into this parenting thing I’m still struck dumb by how exhausting it is. I’m used to it now – used to not getting more than three hours at a time. But that doesn’t mean it doesn’t feel like my life is a slow car crash sometimes.

Because as I said – it’s not just the waking up to babies and toddlers and all of that. And also the – getting so used to not sleeping you can’t sleep even when they don’t wake up. It’s the emotional and physical and every day exhaustion too: Needing to be patient, considered, answering 80 trillion questions a day, picking up clothes, changing nappies, not having time to yourself. That stuff is just depleting. It’s just HARD. 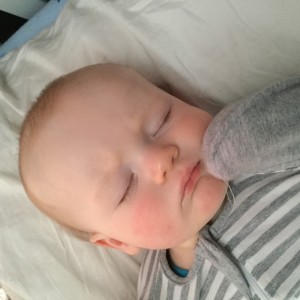 And I often think the following three things:

1) There are other parents not sleeping right? What if they are sleeping? Nobody seems that tired?

I am sure not sleeping is the norm but we just whack on a smile because what are you going to do about it? No point just moping right? Complaining won’t change anything. I do believe that – If I go on and on about how tired I am I feel even more tired.

But – sometimes it’s so good to hear another mum talking about how her kids aren’t sleeping. It really is. And not in a – yay, you’re exhausted way. Just a – that’s right, this is normal way. Because otherwise, it’s so easy to think everybody else’s kids are sleeping but yours aren’t.

When it’s 3am and I’ve been up every few hours – thinking there are other mums doing this too, it makes me feel better. It just does. That we all struggle sometimes. And we are all tired. It makes me feel normal. And it’s normal to not get sleep. Not to get on my high horse – but “society” wants us to believe that it’s not normal for kids to be up during the night. Baby sleep training experts are all about this narrative that your kid is messed up because they don’t sleep 12 hours from birth – they’re wrong. It’s normal.

Again, my rational brain tells me that it’s not my fault my kids aren’t sleeping. They’re sick, their routines have been out of wack, it’s normal developmental stuff. But we live in a world where we are told that babies sleep through from eight weeks old. And if I so much as yawn in public someone tells me how to get my kids to sleep through the night. And the thing is – I’m fine with what I’m doing. You may think I shouldn’t have my kids coming into bed with me, or I should not breastfeed to sleep, or use a swaddle or not use a swaddle, not use white noise, not allow them to have a bottle or a  night feed or a night light or whatever. But it means nothing to you. I have tried everything under the sun and you know what works? Everything and nothing.

I went through a period when I was about 20 where I didn’t sleep for more than a few hours without waking. It lasted almost a year. Why should a child be any different?

Does this mean I don’t blame myself for my kids waking multiple times in a night? Of course not. Because I’m a bit of a dick that way.

I know I will. I know this is temporary. But also sometimes I almost have a panic attack at the sheer force of how much my kids need me right now. And they do. They do need me. And this will pass. And it won’t take long. But right now – I just want to sleep. I want to sleep so bad it hurts. Not a nap here and there but a REAL PROPER FIVE HOURS. And that will come, and soon. Eddie had a period of about four or five months where he slept all through the night and often he does sleep through now – so I know it will happen. I have experience to fall back on. But in the midst of it sometimes it’s hard to keep those illogical thoughts at bay.

And I am tired of feeling lonely in this. I don’t often talk about how tired I am because when I say I’m tired I don’t want anyone to tell me what to do about it. I know what to do. I know what suits my parenting style. What feels right for me and my family. I’m not being a martyr because I don’t parent the way you – unsolicited advice giver – does. I don’t need advice on how to get them to sleep. I don’t need to hear that your kids were sleeping through by the time they were the age my kids are. I’m happy for you – but our kids are different.

You telling me that is as logical as me saying that I sleep all night when you tell me that you have insomnia.

So I guess all this post is saying is – I’m tired.

And to you, if your head is just static white noise and you feel like you might just fall over, I want to say:

It’s not your fault your kids’ aren’t sleeping or you can’t sleep.

And I’m sorry about that.

Good luck for the week.

← Let kids be kids?
Do I have antenatal depression? →

69 Comments on “Goodnight and good luck”