I remember the first time I talked to my son about the word sorry. I had asked him to apologise for snatching a toy from his best friend. He had looked at me with his big beautiful blue eyes and said “Why I sorry?”

I realised that I couldn’t teach him to say sorry, I had to teach him about the concept of remorse and what it means to be truly sorry.

This was a year ago. In the past 12 months or more, I have worked hard to help him understand empathy. He already absolutely feels empathy, to such an extent that I have in the past worried about his gentleness and the way he feels so much for others. But feeling empathy as a child, doesn’t mean you understand what you’re feeling.

It’s my job to teach them that they should not just allow the toxic masculinity that hurts them and helps them wash over their lives without acknowledgement and challenge.

I am lucky that they will grow up with men around them who challenge violent men and never make excuses for violence. I am unlucky – and so are they – that they will also be exposed to so many men who will not challenge it, who will embrace excuses. 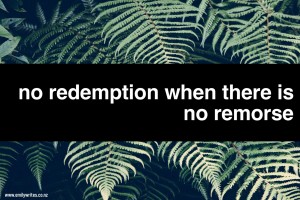 I will teach them that someone who commits acts of violent abuse, and then uses the immense platform they have to further abuse their victim, is someone they should never, ever support or aspire to be. And that silence is a form of support – as they have the privilege and power to be listened to when others don’t.

I have two sons – I will do my very best to raise them to rise above and reject a culture that will reward them because of the colour of their skin (regardless of their race) and their presenting gender.

I will do this for them, but I will also do it for women and those who are at risk of abuse at the hands of men who refuse to learn and who benefit from being who they are.

Men who are adults who can’t grasp a concept my now three year old knows and understands.

← Do I have antenatal depression?
Love and nappies →

12 Comments on “Remorse and redemption”