Minutes of the The In-My-Day Committee

In attendance: Gladys who had seven children and didn’t breastfeed any of them and they turned out fine, John who thinks mothers these days have no decorum, Prudence whose children slept through the night from birth, Doris who has a granddaughter who called her daughter Charlie even though Charlie is clearly a name for a boy, and Earnest who thinks Charlie is going to grow up confused.

Apologies: Betty couldn’t make it as she needs to spend her lunch hour telling a young mum at a bus stop that her baby needs to be on solids because it’s “wasting away”.

Meeting of the In-My-Day Committee is now in session.

John begins the meeting by stating that PC has indeed gone mad because he saw a woman at the pool who was breastfeeding a child right there at the pool.

Clarification was sought as to the age of the child.

Agreement by Committee that actually it doesn’t matter. No children should be publicly breastfed.

“It should be in the home and that’s that”. Vigorous head nodding.

Gladys would like it on the record once again that she never breastfed any of her seven children and they turned out just fine.

Point of order by Doris that there weren’t lactation consultants back then and you just got on with it didn’t you?

Agreement from committee that indeed their generation just got on with it and that’s entirely what’s wrong with this generation. They just won’t get on with it.

47 minute discussion about how there wasn’t anyone to help you In-My-Day. Agreement once again that PC has indeed gone mad.

Interjection that everything has gone to Hell in a handbasket as evidenced by mothers working outside the home.

Prudence asks for silence so that she can spend two and a half hours talking about how she had 12 hours sleep a night In-My-Day because babies weren’t coddled so they slept through the night from conception.

General uproar over the word “coddled”. Furious and violent agreement that children today are coddled.

Agreement that all babies slept through the night from pre-conception In-My-Day and that mothers these days don’t know how lucky they are.

Earnest wakes to agree that mothers these days don’t know how lucky they are.

Doris notes that you had no choice but to breastfeed “In-My-Day” because there was no such thing as formula. Rousing agreement from the committee that mothers these days should be grateful that they have a choice.

“I had no choice but to breastfeed. All children were breastfed in my day and they turned out fine,” repeats Doris for around 90 minutes. “And we didn’t make a fuss, when we were out and about we fed where we needed to and nobody made a fuss!”

Earnest wakes to point out that the very problem is choice. Mothers choose work when In-My-Day they knew their role was to look after the children. And they’re entitled too. They always make a fuss.

Kerfuffle as John puts out his back because he so enthusiastically agrees with the sentiment that mothers knew their role and were not entitled and didn’t make fusses.

Prudence agrees that she never had a challenging moment in her time caring for her children, she enjoyed every second, cherished every moment, loved every day, and had no difficulty whatsoever at any point. Agreement that her daughter-in-law is not cut out to be a mother.

87 minute discussion about how her daughter-in-law is lazy for not returning to work and for making Prudence’s son move to Melbourne for a job. Prudence never sees Theodore or her precious grandson (some time is spent trying to remember grandson’s name – says it is “one of those new age names like MoonBubble”) and they won’t let her visit as often as she wants to.

Last time she went over the house with filthy and she had to say that didn’t she? The baby had just been born but that’s no excuse.

Agreement from the Committee that that is indeed no excuse.

Agreement from Committee that she had to say that. Doris would like it on record that she was vacuuming hours after her son Clarry was born.

Discussion that grandparents have rights too you know. Also that In-My-Day you were house proud.

Doris would like to discuss the need for solids from three weeks old. Agreement that babies these days are underweight. General discussion regarding which foods are best “firsts”. Noted that John’s son was overreacting when John gave his grandson a Werther’s Original when he was five days old. 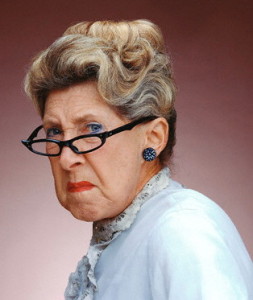 Prudence remembers her grandson’s name – it is Leif. This begins three hour discussion on how children these days have ridiculous names and how In-My-Day you had three names to pick from: Tom, Ben, and Bill if you had a boy, and Mary, Ann, and Helen if you had a girl.

Agreement that Doris naming her daughter Ethel is quite different because that’s a lovely name. And so is Eaton. Motion passed that Eaton be recognised as a Proud Name.

Full and rowdy agreement that children born today are confused.

On record statements from eight day discussion on how children born today are confused:

Unanimous “Well I never” by the group as Gladys reveals she saw a boy with painted nails at the bus-top.

Suggestion by Gladys that she must get home in order to visit her newest great grandchild is met with excitement by the committee.

Discussion of what Gladys’ granddaughter was like during her pregnancy lasts around 45 minutes.

She complained a lot even though pregnancy isn’t an illness. Gladys says she lost half of her body weight but she could stand to lose that much according to Doris.

Because In-My-Day we just got on with it. That’s the problem with this generation…they just don’t get on with it.

This post is for all the lovely older people who don’t live in the land of In-My-Day! Thank you for supporting today’s mums and our coddled kids x

← Sponsored Post: Getting in (and back out) of the kitchen
How to be kind →

10 Comments on “The In-My-Day Committee”