I meet some awesome mums and I thought – instead of this blog always being me, me, me which is so freaking boring and uninspiring….I’d talk to some of the totally badass getting it done mums I meet. They inspire the shit out of me. So maybe they’ll inspire you? A while back I wrote about the Just Fucking Doing It club. I think it struck a chord with some mums and I’ve thought about it a lot since.

The mums out there who are just fucking do it really inspire me. I don’t need perfection, I’m not perfect. I don’t need marathon running and conquering the world – I just want to talk to real mums who are doing cool things – no matter what the scale. You can nominate a mum for me to chat to by commenting here or on Facebook or Twitter. Let’s celebrate mums being awesome.

So here we are! The very first JFDI Club mum – I’m very happy to introduce you to Sera Devcich!

Sera is stand-up comedian and actress and mum. She’s performing along with fellow mum and awesome person Lee Ray on Friday 30 September at the Johnsonville Club.

I had an email chat with Sera about parenting, comedy, life and buffets – all the important stuff….

Sera has one daughter “technically I’ve just the one but she has constant mood swings, so I’m counting her as three”.  She definitely qualifies as a women who is just fucking doing it though she might take some convincing… 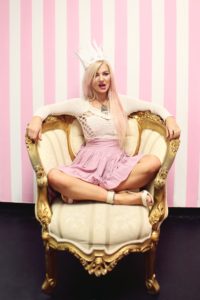 “I don’t want to brag but today I got up and within half an hour I put pants on. Ok, that’s a lie but it was definitely within the first 45 minutes, they were men’s sports trackies. Hot tip for mothers playing at home if you dress terribly enough in the morning your child will be too ashamed to be seen with you and you can drop them at the corner and not have to go in. You’re welcome.”

Really, Sera is also solidly doing stand-up comedy throughout the country. On top of that, she’s producing some of New Zealand’s top comedy line-up shows, various comedy projects, and performing corporate entertainment all over the place. And that’s not all – she’s quietly pottering away at some solo shows…all the while child taming! Actually very impressive.

She’s not sure how she got here: “I’ve always been on the stage and before stand-up comedy I performed about the place in theatre shows, my favourite shows to be a part of were the ones where I got to be funny. I’ve always gotten a massive buzz from hearing people laugh but there is a real lack of comedic roles for women in the industry,” she says.

“One day I decided to do a raw stand-up comedy show and it was awesome. I got to dictate my own material and the set went really well, so well in fact that I got booked for a pro-show straight after. I’ve been going for a year now, I feel like I found my niche.”

Like, I think – all of us – she doesn’t believe in having it all. I was basically crying laughing  nodding reading her explanation:

“It’s utter crap, you can’t have it all, because you can’t do it all, and you can’t do it all because you are human and shit. Having it all sounds exhausting and kind of terrible anyways. To be honest I have like 20% of my life together – the stuff that I’ve prioritised –  and the rest is a shit storm and even at 20% I’m tired but not to the point I’ve forgotten how to be happy. Does having it all make you happy? Really? Because I had it all a smorgasbord once at valentines (don’t judge me) I had it all, like four times over because when in Rome. Anyways it didn’t make me happy.  It was too much, that extra slice of ham ended up meaning nothing to me, I didn’t appreciate that fourth bowl of mousse, seriously I ate until I couldn’t breathe. Then… somebody else got up for more, so you bet your sweet ass I got up for more because in my twisted little head it was now a competition. I then continued to eat until I started sweating and then I vomited on the table and valentines won’t let me back. More wasn’t more. I didn’t win. All you can eat is a good idea but the reality of it is that it’s probably unhealthy. Maybe it’s better to decide what you put on your plate and just enjoy that – it’s not a competition. Also Valentines can be very judgey.”

“You can do anything, but not everything.”

She also doesn’t have a philosophy any more than any of us do – “My philosophy on life evolves to suit my mood, terrible but true. If I’m up to it I’m like “put your best foot forward, we carve our own way in this world” but if my daughter is sick and vomited on my shoes, I’m like, my best foot is covered in vomit, and from there my life philosophy very quickly descends into “it’s not how much we do blah blah it’s important to ask for help” 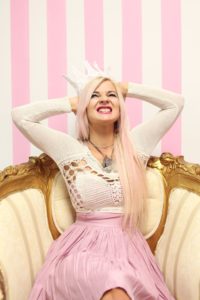 “I guess I’m trying to live my life authentically regardless of how embarrassing that may be on some days.”

I asked Sera about being a parent – “Being a Mum is the most ridiculous unreasonable job in the entire world. If anybody else had treated me the way my daughter has over the years I wouldn’t rest until they were prosecuted. But somehow it still feels like a privilege, the best bit for me is seeing her develop into her own person, my daughter argued with me over her democratic right to have a fringe despite having a cowl lick in the middle of her head she cornered me with hand on hips “AND? AND WHAT IF MY FRINGE SPLITS? TELL ME WHY IT MATTERS?” I couldn’t and I had to apologise. She has a fringe and I love that I’m raising a little girl who’s so much smarter than me.”

What else has Sera learned along the way? Even though we hate advice here, I asked Sera to tell us the best advice she’s ever been given:

“Whatever you do Sera, somebody is going to fucking hate it so play to the audience who love you. “

“Be honest about the shit storm. I have daily Confessional sessions with some of my tribe, it’s not unusual for me to start a phone conversation with: “I think I might be a fuck up babes.” I have people who I can be honest with and who are entirely honest with me, it’s companionship and kindred that gets me through. It’s so good to be able to laugh at how horrible life can be, I also love hearing how terrible they are, that’s a real self-esteem raiser during a bad time. A laugh, maybe have a dramatic sob then a slap on the bum to get back out there. I’m not sure where I’d be without my tribe, I’m lucky I have good people in my life, who will love and praise on me for the most ridiculous things, “round of applause for Sera for not burning toast, she’s a modern marvel.”  In a shit storm you need to celebrate each other’s small wins. Also dancing in my knickers to 90’s music, spice up your life.” 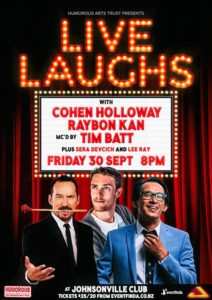 Comedy seems like a tough industry, I wanted to know how she stays motivated: “In terms of comedy, it’s the desire to be a good comedian, which sounds kind of basic but it’s a simple as that, If I want to be good I know I have to take the knocks, so I guess I try and refocus on why I’m doing what I do, cos I love to make people laugh.”

You can win tickets to see Sera and Lee by commenting on this post! I’ve got a double pass to give away – kindly given to us by the awesome folks at The Humorous Arts Trust. The Humorous Arts Trust are a Wellington-based arts charity helping to grow the stand up comedy community in the capital – it’s an awesome cause and I’m really glad they exist!

Thank you Sera for chatting to us! It was great to get to know you just a tiny bit! I’m looking forward to your show. It’s so cool to see mums on stage killing it. It’s going to be a really fun night. And no kids! Bonus!

← A little wish
What is it like to have a child? →