The Just Fucking Doing It Club

When I was pregnant with my first baby I would often ring my sister and bitch and whine about how tired I was and how hard everything was and how I hated being pregnant. I absolutely cringe about it now because I literally moaned about being pregnant (kind of relentlessly) to another pregnant woman who already had a child to look after.

There’s a hierarchy around complaining when you’re pregnant (and also around sleep – as in, if you wake up once a night I don’t want to hear about it, go tell someone whose kid is sleeping through the night) and as I wasn’t a parent yet (and I was also a dick) I didn’t get this.

My sister is a very patient woman. Particularly when it comes to me. Which is handy given how much I must test her patience.

On one of the days when I moaned to her (to make matters a hell of a lot worse she was VERY pregnant and ill and I was just a bit pregnant and ill) I said to her: “I don’t know how you do it. There’s no way I could cope without being able to nap as soon as I get home from work”
I just….what a dick. Honestly. I was such a dick.

Not taking my sister’s sigh as a polite shut the fuck up now I decided to double down and say:

Really, how do you do it? I would just be so tired!

Then, and it’s stuck with my ever since, my sister said “I don’t know, you just do it, it’s not like anybody else is going to do it for you”.

At the time I was really committed to being annoying so I just said some more annoying stuff like WELL I AM JUST SO TIRED I THINK I’LL HAVE A NAP! YOU SHOULD HAVE ONE TOO!

Like, it’s a blessing my sister doesn’t live in the same country as me, I would full on punch her in the face if she told me to have a nap when I was super pregnant and running after a small child. But she wouldn’t say that because she is the brains of the family.

Luckily, she didn’t jump on a plane and punch me and she didn’t even yell or anything (she was probably too tired, or quite used to me being annoying).

Fastforward to being pregnant with my second baby and running after my first and one day at work someone said to me:

I don’t know how you do it! I get so tired when I have a late night and I’m not even pregnant!

And my sister’s words came back to me.

Every time someone says “I don’t know how you do it!” or “You must be exhausted! How do you cope?” or any variation of this I hear my sister’s voice and I just think:

You just fucking do it. You just do.

And you know what – it is fucking impressive but also – it is what it is.

We are the Just Fucking Doing It Club.

Nobody gets shit done like mothers do. The fierce determination, the focused energy, the quiet and methodical mahi of parenting – mums are killing it.

When you’ve got to work because nobody else is going to pay the damn bills.

When you’ve got to get through that kindy drop off because shit has to get done.

When you’ve got to get through the day with a fucking smile (or 8000 smiles) after three hours sleep.

When you’ve got to get the lunches done even though you’d rather be watching House of Cards and having complex feelings about whether or not you’d sleep with Kevin Spacey if you were really drunk and somehow a Washington intern even though he isn’t actually hot at all but that scene with the Father’s Day thing that was gross right but also kind of hot? BUT DEFINITELY GROSS RIGHT but hot?

When you’ve got to get to a Plunket appointment then to Rock n Rhyme and get six loads of washing done then make your midwife appointment and entertain your toddler in the waiting room for 40 minutes.

When you’ve got to finish the newsletter for your kid’s co-op while your toddler tries to maim himself by climbing up the pantry shelves.

When you’ve got to somehow get the baby to realise pamol isn’t poison so you can bring down a temperature while you try to make a doctor’s appointment but you keep getting put on hold.

When you’ve got to fix the wheel on the buggy and make sure the baby doesn’t chew through the cord for the TV.

When you’ve got to sort the phone bill and pair up all the socks and listen to your three-year-old’s complex story that ends with “SO WHY DON’T YOU HAVE BALLS DEAR MAMA?”

When you’re sure you’ve got nothing left and you just want five fucking minutes but that’s not going to happen because your baby needs to watch you poo like seriously they seem to need this more than anything they’ve ever needed before.

When you’ve missed the fucking bus or your car needs a warrant of fitness and you have to get to a job interview.

MAMAS ARE JUST FUCKING DOING IT.

When they’ve got nothing left to give mamas are still giving.

So on the days when everything goes wrong, on the mornings after the nights that were agony, in the afternoon when you’re so tired you feel like it hurts to move – remember you’re doing it. You’re fucking doing it even when you feel like you’re a failure. You’re not.

Look at you – you’re fucking doing it.

This life is you, you’ve made it and you’re making it.

Never forget that. When you get a chance to stop and drink some cold coffee or tea, if the kids get to sleep and you get to pour a glass of wine or fuck it, a gin, make sure you take a moment and say:

You’re doing it so well that everyone around you is just like how does she do it? How does she cope?

And you can stand up and say:

I just fucking do it.

And, just so you know – you do it really fucking well. 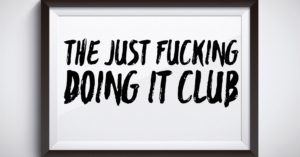 ← I hate winter
Put down the pitchfork →

20 Comments on “The Just Fucking Doing It Club”