Sometimes the journey to bed is calmer than other nights. He angrily asserts that he doesn’t want to sleep. His words are MAMA, DADDA, EDDIE, MINE and he yells them one after the other. I wish we could understand him. There’s a gulf between us at bedtime. And even holding him close to my chest I feel as if there’s water between us.

He dips and falls in his cot – holding his arms up reaching for us if we put him down. We respond with love. We quietly and evenly tell him he must sleep.

A routine to the minute. We keep time and the clock holds all of the hopes for the night as well as signalling that there’s just so many open hours ahead of us.

Most nights it is a thrashing chaos. I hold my hand on his belly and shush him. I sing softly. I hold him in the chair – wedged into the corner of his tiny room. I lay on the mattress by his cot – with my hand through the bars, stroking his hair.

The mattress lives in the room by necessity. Sometimes we are so exhausted we fall asleep seconds after he does.

He cries. He screams. He coos.

My husband starts the first shift, then I’ll take over. Sometimes one of us has enough fortitude to give the other the night “off”. We’re quite equal – he seems to have no preference. He’ll drag either of us into the night. It makes little difference which one of us has to squeeze our eyes tight against tears in the dark.

When his breathing calms and I can feel his chest rising he is Schrödinger’s baby. In the dark I don’t know if he’s awake or asleep. I have to time my exit perfectly. If he’s awake and I leave I’ll have to start over. But I despair at spending more time than I need to in the tiny room of no sleep.

I think of all of the things I need to do. I become more frustrated as another half hour passes. Forty minutes. An hour. I try to swallow down and shake away the feeling that I have so much to do. I have to be here. This is where I need to be. But I don’t want to be here.

And then I think – what parent thinks that?

I feel guilt in treacherous waves. It feels like tempting fate to say I don’t want to be in this room of no sleep. The reason why we don’t voice our darkest parental frustrations is surely tied to the depth of our love for our children. What if I said something – that I didn’t want this? And what if? What if by some terrible cosmic force my beloved child was taken from me?

I touch a button when I see an ambulance. Keep the souls safe.

I am a sceptic, an atheist, and terribly superstitious.

After my baby was born I never stopped knocking on wood. The tap, tap, tap is my life now. The soundtrack to Life Parenting With An Anxious mind.

At my beloved aunt’s unveiling there was a haka. Beautiful and devastating. A powerful grief exploding. So fitting for a woman who was loved by so many. She wasn’t my real aunty. She was my husband’s. But I adored her and she loved me too. Really.

I miss her like we all miss the people who we imagined rocking our babies. Before you carried your baby you imagined a photo and they were in it and now you’re here and they’re not. And sometimes that seems absurd but it’s so ordinary – that sadness. The worst thing is how used to it you get, you shouldn’t get used to someone being gone forever.

During the haka I became overcome with emotion. I began to sob and I looked around me at the trees gently swaying in the wind. A kaumātua leaned over, I suppose wanting to help one of the few pākehā in attendance – he said, that’s our tīpuna, the ancestors, the family who were there before, they’ve come here for us. They’ve been called. And they’re all around us.

I felt like I was surrounded by love and I’ve felt that since.

I’ve felt it in the room of no sleep.

Sometimes I cry in the dark with my baby. After an exhausting day, after the night before of no sleep and no sleep before that and no sleep coming – I feel so overwhelmed and hollow.

I cry holding my baby’s hand through the bars of the cot. Imprisoned by the absence of sleep.

And then I’m calmed as he is.

I feel that feeling again.

I wonder if it’s all the love that we send each other at night.

The mamas all around the world who are so tired. Their backs sore from rocking their baby. Their throats raw from singing and shushing and a cold that never quite goes away because their immunity is shot from never sleeping. Their eyes red and sore. A dull throbbing headache. An aching neck. A longing for quiet and rest.

I think of them when I try to soothe my baby who won’t be soothed. I look past the curtains and picture Te Marama. And other mothers looking there too.

An invisible thread tying us together in this shared experience.

There’s a level of exhaustion that some mothers experience that cannot compare to anything else. It is expected and understood by most that babies are not great sleepers.

But at some point there stops being sympathy for mothers and fathers whose children don’t sleep. As if there must be some explanation. The rules haven’t been followed. It has to be someone’s fault. You just have to do the right thing.

Some mothers with children who sleep give advice on how to get your child to sleep. As if you haven’t tried everything already.

I met a mother once who said her baby slept and she didn’t know why. It was just luck she said. And she’d never ever give advice because who knows what makes a baby sleep?

I laughed and then began to cry. Big fat tears filled with relief. “Oh my gosh, what’s wrong with me?” I laughed again and coughed and sobbed. She pulled me into her arms – “It’s OK. You don’t have to be sorry,” she said.

Relief. Relief in the silence rather than the advice. The stupid advice.

You need to leave them to cry. They say. I did. They say. It only took three days to get them sleeping through the night.

You need to co-sleep. They say. That’s what I did. They say. It’s the easiest way to get them to sleep.

You need a routine. They say. The same bed time every night no matter what.

You need to look for tired signs. They say. They’ll rub their eyes and when they do – put them to sleep.

They need to be in the cot and you need to leave them and check every eight minutes, then every ten then every fifteen.

Don’t rock them to sleep. Just put them straight down.

They speak with such authority and it’s so tiring.

And each line is delivered as if it’s wisdom.

And if you react the way you want to with rolled eyes and say – our babies are different, I do have a routine. I’ve had one since he was four months old. I know what tired signs are – he’s my second child. I co-sleep. I have tried not holding him. I’ve tried no eye contact. I’ve tried everything there is. Maybe your child just isn’t mine.

Even as a child?

Maybe I’m not doing anything wrong.

Maybe this is just how it is.

And sometimes they’ll make comments like – well, when you’re tired enough you’ll change your mind. Or – I had to, I was so tired I was going crazy.

As if you’re not. As if you just have to reach some point where you say oh golly, I am tired! I’ll just try the newest sleep fad and I’m sure it will work because it worked for you. It’ll be just like a switch I flick. Once I’m tired enough.

And I start to feel so angry and frustrated and I want to scream and cry and I want to switch off all the noise. I’d rather be in a room with a screaming baby than listen to another person tell me how to get my child to sleep as if they know anything at all.

As if it’s not a cosmic joke which babies sleep and which ones don’t.

And then I feel calm. And I feel them.

The mums with the babies who don’t sleep. Who never give stupid advice. Who never assume you’re just not doing it right. Who never say when you’re tired enough you’ll do this.

They just smile and say – yeah. Solidarity. Mine is three. And she hasn’t slept through yet. Or – just – I’m so tired too. What I wouldn’t give for sleep!

And I feel safe with them. Like I don’t have to explain myself. Or lie. I don’t feel shit around them. I feel at peace.

The mothers of the never-sleepers who every night go to their rooms of no sleep.

I hope they feel the invisible thread.

I hope they see the moon too and know we are there. Us too. 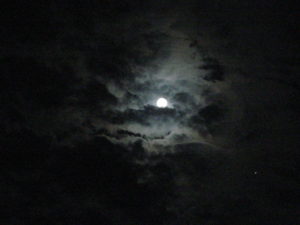 ← Suicide Squad review: I can’t believe I put on a bra for this
Dear Mamas: The Podcast – Episode five →