Occasionally, I see comments from grumpy people who are very offended. Not by what I’ve written necessarily – more just, that I’ve written at all. They can usually be found on Facebook, when someone else has shared my post. They never seem to have the guts to tell me on my page or on this blog. And there was one on my first post in the NZ Herald (I know, I said I wouldn’t read the comments, but people kept telling me they were nice so I went back…and they were nice, so thank you everyone who said nice things).

Anyway, these responses to me writing (not my writing) are variations on:

HOW VERY DARE YOU TELL EVERYONE ABOUT YOUR LIFE ON SOCIAL MEDIA.

They say that “normal” people don’t share ALL OF THEIR LIVES on social media. That they – anonymous angry people – only tell “close friends” about their lives (heh – I find it hard to believe any of them have friends let alone close friends). They certainly don’t SPEW EVERY MOMENT OF THEIR LIVES all over the internet.

Is this spew? I don’t think so. Well actually, sometimes I feel like I have to get these posts out – so maybe they are a tad vomitous. Isn’t that just writing in general though? I sure hope so.

One very important man who can’t let an opinion different to his stand says I’m pathetic. He says parenting is private. All of it. Or maybe just some of the bits – Jeff didn’t specify what parts you’re allowed to talk about and on which platforms. Which is utterly devastating for me as a grown woman who deeply wants to please Jeff.

Are my friends on Twitter imaginary? Are the people I’ve met through this blog and become close friends with somehow less real than other friends? Just because we don’t talk face to face?

Parenting makes your world bigger as it makes it smaller. There’s nothing quite so isolating as parenting – being up during the night rocking your baby to sleep alone. But when you pull out your phone and talk to other parents on Twitter – even if it’s just:

“Same! It’s 4am here and he’s been feeding for three hours!”

You’ve expanded your tiny world. Reaching across oceans and giving a weak and tired thumbs up to another parent is special. It’s important. It makes us feel less alone, less lonely. It connects us. Binds us. How can you see so much negativity in that?

How can you think sharing is wrong when half the time as parents we are drilling into our kids that they have to share?

In a little Facebook group someone says ‘is this normal?’ and they’re scared, and they’re worried, and they’re not sure if they should be scared and worried and someone in Picton tells them that their baby did that too and it was fine and don’t be worried and it’s OK to be scared. And you can almost feel the relief from the mum in Tuakau.

Or when you see a mum say that she can’t cope and she feels like she can’t be alone right now because maybe, maybe she can’t take this anymore. And suddenly a little community springs into action and they go to her house and they take her to the GP and while she’s there other mums clean her house and look after her baby and drop over some cooked meals.

In a group for parents who make their own baby food, or whose kids wear cloth nappies, or in a group for buying and selling kids books, or a group for parents of kids with disabilities or in a group of mums from the UK, someone says they can’t stop crying because their six year-old is sick and their four-year-old is sick and they have mastitis, another mum says she will get her some pain killers and some cabbage from the supermarket. She’ll be over in half an hour and she’ll bring lunch for the kids.

This isn’t new – parents have needed help and connection and love forever. We just have new ways of sharing and supporting and caring now.

It’s a common theme to say we don’t have villages anymore. But I think we do. I think our villages are online – and they’re scoffed at, just because they’re online.  And that’s BS.

Because – Aren’t you glad she has someone to reach out to? How can you begrudge that? What would she have done if she’d followed your advice? Shut up. Suffer in silence. Stop being so pathetic.

I have written about some really personal things – my prenatal depression being one of them. And it was really hard to write about. I felt like I was going to vomit as I pressed publish – so you know, maybe that spew comment isn’t far off the mark. But you know what – my inbox was flooded with mums who had either been through the same thing or were going through the same thing.

And three mothers told me it saved their life.

So the “how very dare you” mob can bugger off. We CAN talk about this stuff. WE NEED TO TALK ABOUT THIS STUFF. We can support each other and reject this ridiculous narrative that people force on us.

I’m sick of the idea that there are mummy wars and parents these days share too much and they overthink everything and in days gone by you just got on with it and this and that and we’re all just doing everything wrong.

We do get on with it. But shit, we help each other while we are getting on with it. And sending a tweet saying “You doing OK? Rough night?” is no different to leaning over the fence and saying “Want a cuppa?”

We’re not doing everything wrong. We’re doing this solidarity thing right. Every day I see beautiful, breathtaking kindness online – I’ve never seen a parent ask for help online and not get it.

When you’re in pain you can talk about it. You can ask for help. You can share your stories and help others. Your friends online are just as real as any other friends. The community you create – on Twitter, Facebook, a blog, a forum – it’s real, don’t let anyone tell you it’s not.

I can take nasty comments. I don’t like them, but I can take them. There will always be people in the world who are mortally offended by the fact that you wrote a blog and they didn’t agree with it. I know that. I’ve dealt with it and I know I’ll continue to deal with it.

But it’s worth it. It’s more than worth it.

I print every post I write and put it into a little folder. When the boys are older I would love it if they wanted to read them. I will feel proud to tell them that I got to share our lives a little, and that by sharing we made our world a little bigger and brighter. And I will tell them about Abi in the UK and how we are mum friends even though we will never meet, and I will tell them that their best friends are children whose mothers I met in Facebook groups and who are now my nearest and dearest friends, I will show them the emails from mums in Denmark and Japan and Johannesburg saying these stories make them smile. I will tell Eddie that we set up a charity for kids like him – that dozens of kids dance every week because his love of life (that never diminishes no matter what he faces) inspired so many that they donated over a thousand dollars for the cause. That there were donations to the children’s hospital in his name after each of his surgeries. I’ll tell Ham that his birth made me a writer and brought all of these wonderful opportunities for our family. That his birth made someone on Twitter fart-laugh (I reckon at aged two that’s going to be a real winner story for him so I might crack it out sooner).

I’ll tell them both that we’re all part of something bigger – and that when we share we bring people together and there’s never anything wrong with doing that. No matter what anyone says. 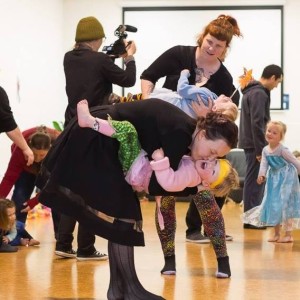 Here I am oversharing again.