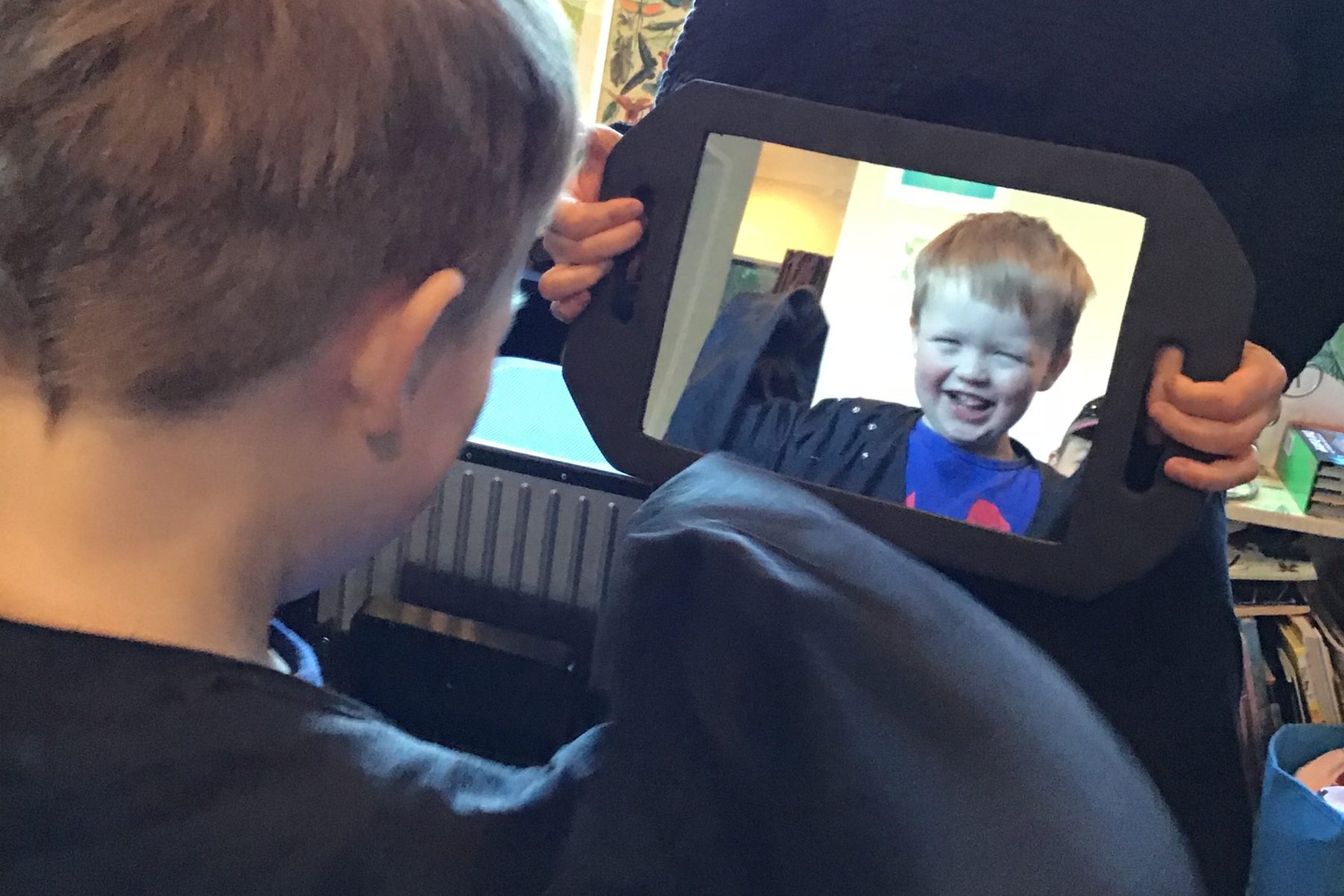 The other week I was just sitting there like what am I going to do with my damn hair. I love going to the salon but I can’t find the time. If I go out during the day I miss work hours and I have to catch up in order to be paid. And then that impacts on kindy pick up and being able to be at home with the kids.

So I just don’t get my hair cut enough. And I have short hair so I need to get it cut often.

And then there are my precious children – Hamigotchi is the worst. THE WORST. At getting his hair cut. We have had barbers refuse to even start doing his hair, others who have stopped half-way through and said no more and others who have just given up and given him a rat-ass shit haircut and then I’ve had to pay $30 for the pleasure.

At one place he screamed that it hurt and I told him it didn’t – and then when I got home I found out the barber had scratched him with the clippers. Which made him even more stressed about having his hair cut.

Eddie too hates getting his haircut because the hairdresser doesn’t understand his requests of “Make me a star” and “Make me look like I’m a beautiful dancer”.

And then we met Emily Natoli. Emily who I want to have a wine with and be best friends with. I get contacted a lot by mobile home hair dresser types and to be honest I am too vain to accept any of the offers of cuts. This is terrible but my belief has often been that cuts at home look terrible and they’re usually by people who can’t get jobs in salons. I know, what an asshole. Usually I say “Can you tell me about where you’ve worked and have you got a portfolio?” and nothing comes from it.

Emily on the other hand is a hair stylist and has mad skills. She has worked regularly at London Fashion Week!! She’s styled for Marie Claire, The Times, ID, Vogue and Hunger. SHE DID Cara Delevingne’s HAIR! And Take That’s hair!! And she’s worked with Topshop, Ports, Primark and M&S. She is a Redken Certified Haircolorist and trained at the prestigious Vidal Sassoon Academy Bond Street (London). So I was down. 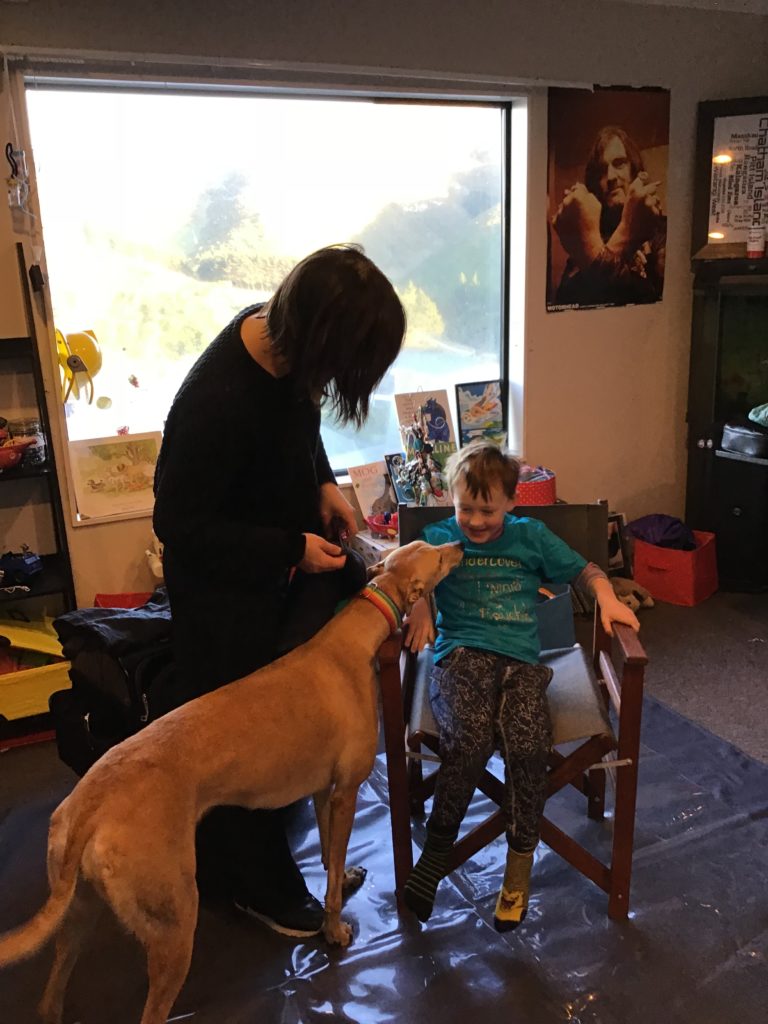 The best thing though wasn’t the great haircut she gave me (it was great) – it was how much fun the whole session was. She came at 8.30am and did Eddie’s hair before he went to school – she was super speedy and chatted away with him which he loved. She tolerated out greyhound winding around her legs. Then she cut Hamburg Airport’s scodey hair while he was an absolute terror. And we were cackling. Usually it’s so stressful for me to watch him get a hair cut (and extremely stressful for him). But this time – it was a joy.

Hamwise Gamgee loved her and giggled so much he got the hiccups and started burping directly into her face. Emily and I were both laughing so hard we had tears. He would not sit down and she just followed him around snipping. At one point I was holding him while she snipped. My husband gave it a try for a few minutes. He even draped himself over the dog for a portion. He climbed onto the back of the chair, and sat on her cabinet with wheels. He was an adorable nightmare and she was so patient and just had fun with it. 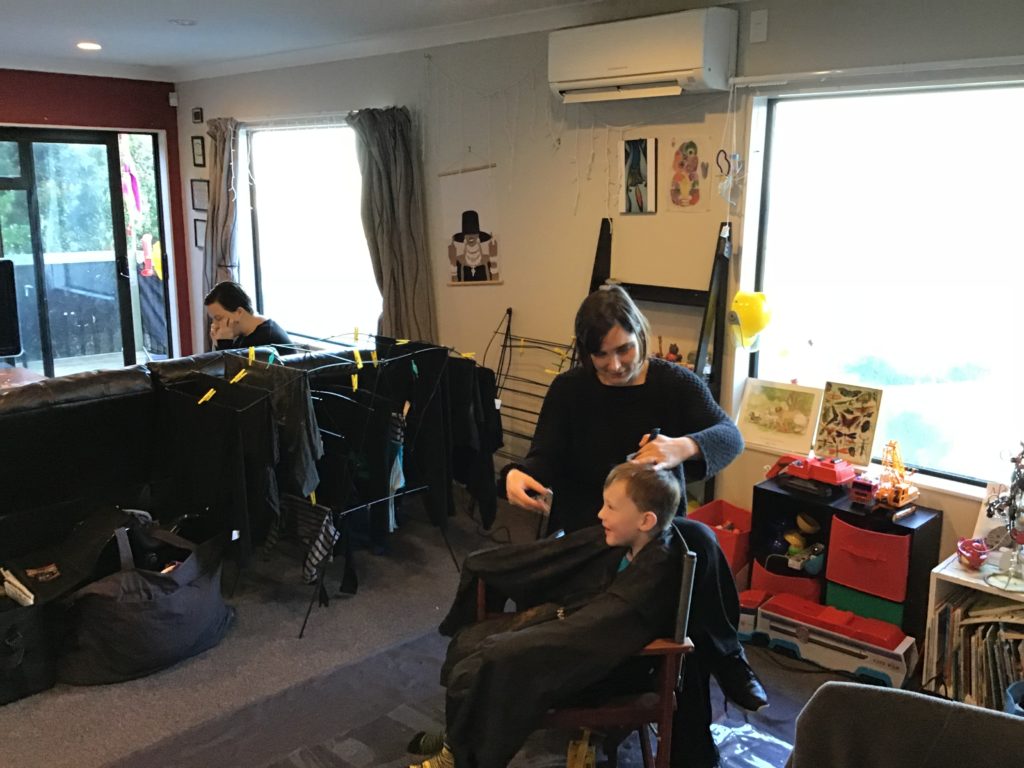 You can tell Emily loves kids – and that’s all I want from a hairdresser. Someone who doesn’t act like I’m ruining their life because I want them to cut my kid’s hair. She was so kind to Hamlet who ultimately just struggles with sensory stuff and keeping still. It helped so much to be at home where it was quiet and he felt safe. There were NO TEARS – it’s the first time ever he has had a haircut without crying.

And while Eddie had his hair cut I was able to do some business calls and bang out some work which was PERFECT. Like usually I leave the barber after the kids have been seen totally traumatised, sweating like a pig and desperate for a shot of absinthe with a meth chaser. It is so much better doing it at home. 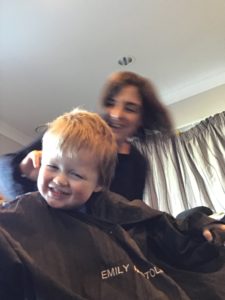 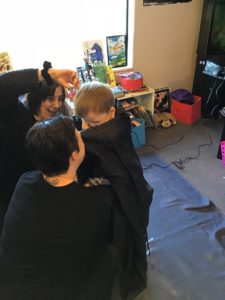 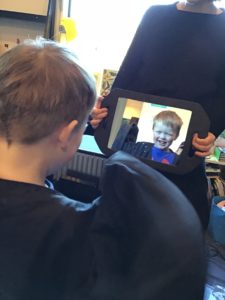 Getting a head massage at home (even in my fucking gross bathroom) was super relaxing and Emily and I got on so well. I plonked Le Ham in front of Paw Patrol and I was chill AF. Honestly, getting the whole family sorted at once was awesome. 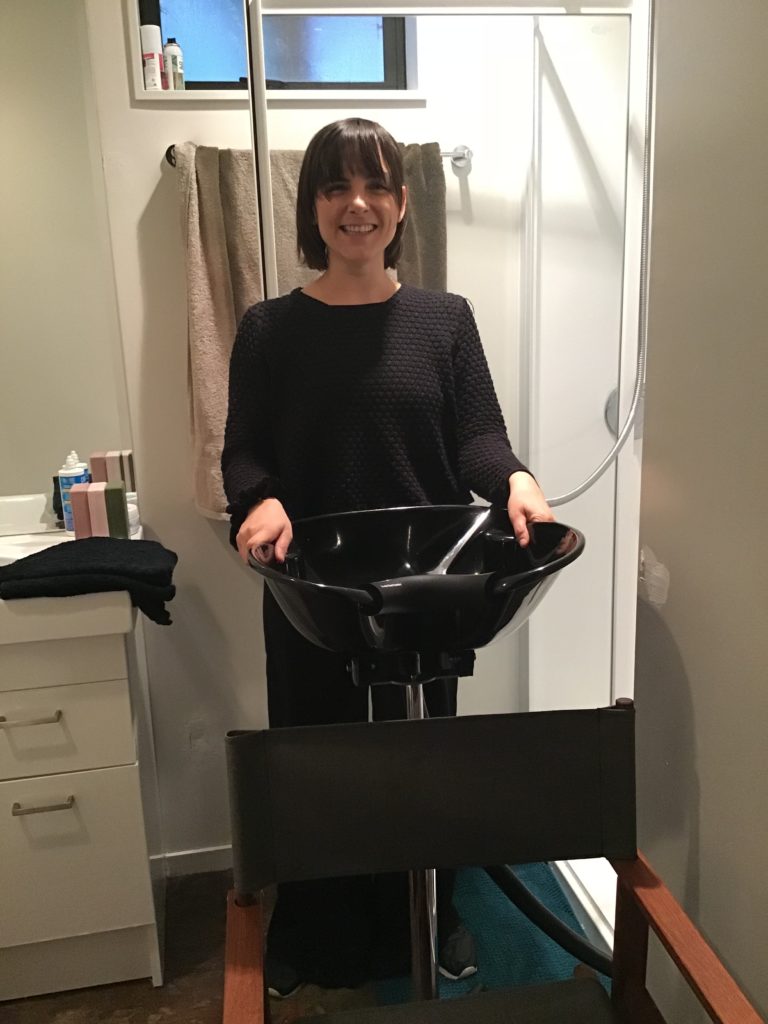 And I love my cut. LOVE. IT. She takes photos to use as reference points for your own Pinterest page to map your hair styles. So great.

Here are Emily’s prices and you can find out more about her by visiting her website. You can book after you get home from work or before school – She has awesome hours. And you don’t have to deal with fucking parking. Book here.

Thanks for visiting us Emily. We love you! Emily hooked a sister up and did this first session as a freebie which is awesome because my card declined at the supermarket and I am so broke I considered watering down milk the other day.