Give me the Moon

My son’s current obsession is the Moon. Each night he insists that we take him on to the deck to look at the Moon. If he can’t see it he implores us to “geddit” for him. I’m not sure if this is a diversionary tactic ahead of bedtime. Either way, he’s all about the Moon right now.

So I’m looking forward to Capital E’s National Theatre for Children production of Kiwi Moon for obvious reasons. The good folks at Capital E contacted me after I wrote about their National Arts Festival. They offered me tickets to see another show during the festival – Orchestra of Spheres: The Sound & Light Exploration Society.

I don’t really know how to describe The Orchestra of Spheres. They have home made instruments. They dress in awesome outfits – kind of like drunk hipsters at the Sevens but without the hideous cultural appropriation. And their show is a weird orgasm of sound and light (fitting I know). I mean it sounds pretty messed up to say orgasm when referring to kid entertainment but they’re not really kid entertainment. For starters – you don’t want to smash your skull into the nearest piece of concrete when you listen to them, so that’s a sure sign that they’re not a made-for-kids band. They also seem to avoid mind-numbing kid lyrics (you know what I mean by kid lyrics – yesterday, on Play School they had a song that included the lines: “they’re egg-shaped because they’re eggs”) Don’t get me wrong – the kids LOVED the show. My little E and and his bestie were dancing in the aisles, as were most of the other kids at the show. But they are a band that could and do play pubs and clubs, and you can see why. It really was joyous music. Weird, funky, psychedelic, jamming art that had plenty of sass. 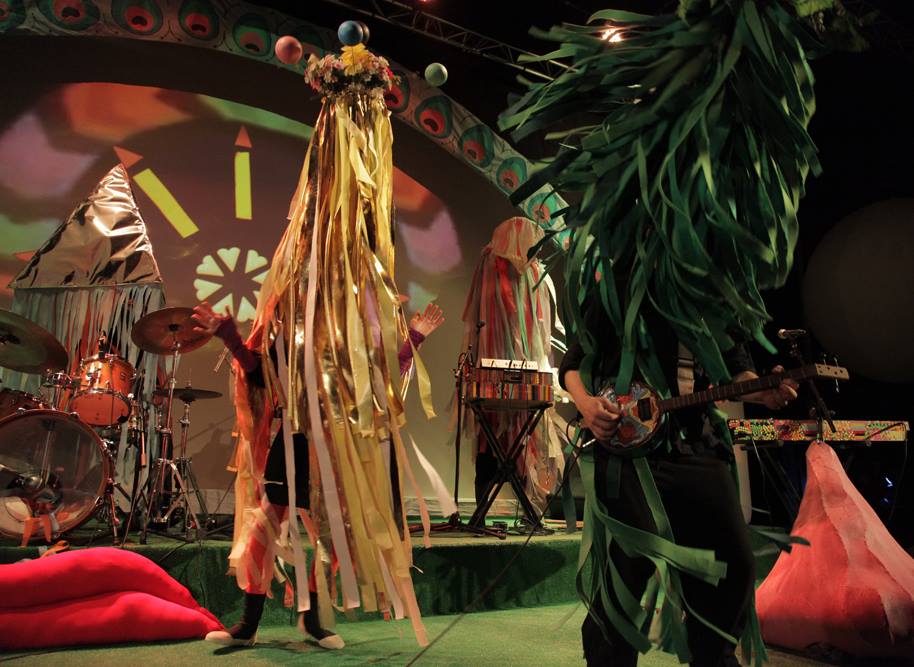 It’s a shame that at the show I went to the crowd really only got into it for the last two songs. I think that was possibly due to it being a matinee performance. We had the kids on our laps and they were pretty desperate to get on their feet, but it wasn’t until the front-person-tree-jellyfish told everyone to stand up that we felt we had permission to let the youth go wild.

Eddie said his highlights were: The World Moon (a giant white balloon that they projected images of the world on to, it did look like the Moon) and The Tree Man (for the last song the front person-triangle was dressed like, you guessed it, a tree). We had a great time and surprisingly the 50 minute show felt short. There was some kind of theme to it – a trip through the universe. The theme did kind of remind me of some of the experimentation I did in my youth but we won’t go into that. I’d definitely see them again.

But I’m really looking forward to Kiwi Moon which opens tomorrow. The season runs until the 18th of April. It will be my lad’s first theatre show. I’ll post a review once I’ve taken him along. Here’s what it’s all about:

A little white kiwi thinks the moon might be his mother because it is white and bright and round like him. Prepare to snuffle and shuffle through the forest floor, hula with the huhu grubs, watch out for the wekas, and calypso with the handsome kakapo in this charming tale of one little white kiwi’s quest to find his place in an often strange and sometimes dangerous world.

That sounds pretty damn cute to me. Maybe if I ask super nicely Capital E will flick me a family pass for me to give away to any Welly parents reading this. Keep an eye on my Facebook page or check back here for updates. And if you see Kiwi Moon please let me know what you think of it. I think it’s great to support kids theatre. I’m doing my best to make sure my bogan kids get some culture in ’em.

Have you taken your kids to a show before? Did they like it?

6 Comments on “Give me the Moon”