The Box Man with a Box on his Head

Is the alternative title my three-year-old came up with for Capital E’s Shu’s Song.

We went to the premiere of Shu’s Song on Saturday. Because it was the premiere there was bubbly. And I had two glasses because I felt like I deserved them because my son and his friend were running around bashing each other while all of the other children in attendance were behaving perfectly.

I sure love being the parent with the completely out of control child *slurps wine*.

While I drank I talked to my friend (whose son is the same age as mine) about children’s theatre and why we both take our boys to as many artsy type things as we can.

We both agreed that it helps reduce the guilt of chucking them in front of the TV. It’s kind of that internal compromise you have aye? Like sometimes I think – well, he hasn’t watched TV for two days so surely that means he can watch like ummm six hours today. 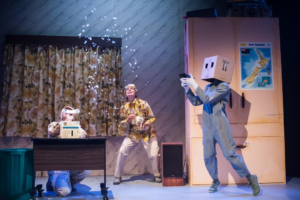 In all seriousness, we also talked a lot about how we want our kids to love the arts and that we are incredibly lucky that a lot of the arts in NZ are accessible to children. Most shows are cheaper than a movie ticket or they’re free.

But the recent NZ Arts Festival did have a fair bit of free entertainment for kids. And the work Capital E does is really fantastic. They really do work hard to encourage New Zealand children to embrace the arts. Lots of people don’t realise that Capital E is a not for profit. They’re managed by Experience Wellington, a charitable trust and they’re partly funded by Wellington City Council, but they rely on donations from the public too – and parents taking their kids to the National Theatre for Children shows.

Their indoor playground by TSB Arena is also free and pretty great and has bottomless coffee too.

Anyway, back to the show. It was a lovely, lovely show. I mean it’s a person with a box on their head so automatically it will appeal to children under four.

Shu – AKA Box Man with a Box on his Head – brings to life a bunch of things in his little office. Little lamps become little beings. Staplers are magical. An old phone can fly. It’s all very cute.

I really liked the fact that I didn’t have to explain any deep themes to Eddie. Nobody dies. Nobody is dying. Nobody gets abandoned or attacked. 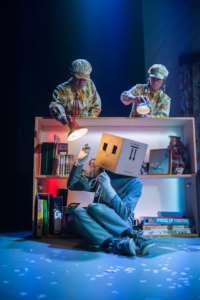 It’s just a person with a box on their head making some music and having a great time.

When you want a lazy parenting day and you don’t want to have to explain that the Kiwi in Kiwi Moon’s mum is probably eaten by a dog ?!?! and DON’T WORRY MUMMY WON’T BE EATEN BY A DOG (probably) something like Shu’s Song is perfect.

I really liked that there isn’t any dialogue. It meant the kids could participate and also go a little bit nuts. All of the children yelled out stuff the whole way through the show and it really added to it and was quite fun. It really made the whole thing more joyful.

Eddie observantly yelled HE GOT A BOX ON IS ED like 10 minutes into it. And a scene where Shu opens a book and gets a a surprise was met with delighted squeals of OPEN IT AGAIN! OPEN IT AGAIN!

I was so happy to finally be attending a show where I didn’t have to spend the entire time saying SHUSH EDDIE JUST PLEASE SHUSH I WILL BUY YOU AN ICE CREAM OR A PONY WHATEVER JUST SHUSH.

There was also ample chance to boogie. The finale is quite delightful. Actually if I was going to use one word to describe the show it would be that – delightful.

So if you’re looking for something to see this school holidays – Shu’s Song is a great show for littlies. And a great way to support children’s theatre in New Zealand.

Shu’s Song is in Wellington all next week – 18 April through till 22 April. You can buy tickets here. Then the cast will head to Palmerston North on 5 May and begin a tour of New Zealand:

← Mammoths on ice skates! – A giveaway
The sea →