I met Craig at Webstock. We sat in the corner and showed each other photos of our babies – the great past time of saddo parents everywhere (no offence Craig). Seriously, I LOVE proud parents. I love no-chill look at photos of my family mums and dads. I am definitely that parent. Imagine having to deal with me every day? I literally write about my kids all day, tweet about my kids all day, and talk about them ALL DAY. I am insufferable. I’m not suggesting Craig is insufferable, he might be, we don’t know each other that well….But he struck me as a parent who is like me. Therefore, since I’m a narcissist, I liked Craig straight away. I meet so many people through this blog, and a lot of them are dads. I am really pleased to be able to finally share a guest post from a dad on this blog. I’ve hoped I’d get a dad post eventually – it might finally shut up those “what about the dads!” comments I get. But probably not. I love dads, and I have a lot of good friends who are dads, some of them I met through this blog. But I’m a mum, so I don’t bother to do “dad perspective” stuff. That’s why I’m so happy Craig wrote this post. I think it’s lovely. Delightful. It’s all about his first two years with his two gorgeous babies! Thanks for sharing with us Craig!

Just over two years ago I donned a pair of white overalls and was led into an operating theatre at 5am. My wife had a green sheet stretched out like a volleyball net across the bump where two children had been percolating for the past thirty-five weeks. I couldn’t see past the sheet from my position near her head, but if I had I would have had a front-row seat for the insicion-and-viscera show that was an emergency ceaserean.

The doctor – our doctor – a brisk man who joked in a way that you were never quite sure about was now an image of intense concentration. His work was swift and methodical as he sliced into my wife’s abdomen, and removed both twins in rapid succession (Gwen Stefani’s It’s my life was playing softly on the theatre stereo and both babies were on this side of the womb by the time it had finished… even at this life-changing moment I thought ‘well, this is a lame choice for the kid’s first ever exposure to music’).

And with that our identical twin girls – Lillian and Ruth – were no longer black-and-white blobs on an ultrasound screen, they were flesh-and-blood, skin-and-hair, poop-and-vomit humans. I won’t subject you to the traumatic experience of our post-birth care (that’s a story for another, particularly bleak day) but over the past few weeks as we slowly got more and more used to our tiny, fragile babies we started defining time in relation to how long it was until the next feed or when the next relative was coming to stay. Another twin dad gave me the single best piece of advice I’d ever received when he told me that devising a routine, and sticking steadfastly to it was absolutely paramount. While I often waver with healthy eating and exercise goals, I had the regimented discipline of the drill sergeant from Full Metal Jacket when it came to the girl’s feeding-and-sleeping routine.

The first month was hard. As was the next couple, and the rest of that year. It never stopped being hard in one way or another, and the challenges just kind of changed without really decreasing (“yes! they’re finally sleeping through the night.. oh cool, now they’re ornery as hell all the time because teething…”).

And it wasn’t just hard either. Having twins came with a wide range of things that were unexpected – stuff that didn’t fit with anything I’d read about or thought I’d have to deal with.

The first is the questioning – at least half the time I take the girls anywhere public I’ll have to field questions like I’m that guy from Back to the Future.

“Are they twins?” a doe-eyed stranger will ask after catching my gaze, and my answer will oscillate between either a polite affirmation and a chat or a curt “yup” depending on how tired I am at the time. 90% of the time this question is followed up by the same supplementary question; “Do you have twins in the family?” Well, yeah lady, I have cousins that are twins but identical twins like these aren’t really a genetic thing. Now if you’ll excuse me, I’m trying to finish the grocery shopping and WHY ARE THERE SO MANY DAMN TOILET PAPER OPTIONS??

The other unexpected thing I came to realise was how much flip-flopping a pair of babies would do. I was under no illusions that I’d often be dealing with one cranky baby and one that was calm and chill, but what I wasnt counting on was the rate or consistency of how they switch from one role to the other. It was disconcerting to see one twin screaming her vocal cords out while the other would sit still wearing a goofy contented grin, only to have them swap dispositions completely and instantaneously two days later. This trend has leveled out as the girls have grown, but still reemerges like the bloated corpse of Rod Stewart’s career every so often and is still annoying to deal with (like Rod Stewart – probably).

And if you want to see a tableau of pure, chrystalised panic; peek through the curtains of a room where one relaxed baby is sleeping near where the parents are desperately trying to stop the non-sleeping one from howling like a banshee. Its a tense scene.

Over the past two years of tantrums, turmoil and Teletubbies Lillian and Ruth have gone from tiny, needy balls of screaming and excretions to larger, less needy, sweet bundles of babbling energy. We decided long ago that we wouldn’t have any more children, but reflecting back on the first two years, I don’t think there is much we would have done differently. For all the grumbling I’ve done over the course of this post, I love being a dad.

When the girls were about six months old a buddy of mine with a pregnant wife asked what the hardest part of being a dad was – I answered “well, you’d think it would be the stress associated with the financial burden, or the guilt that you constantly feel about how you’re going to inevitablely mess this kid up, or the anxiety of local and world events that suddenly impact you much more severely than they did before, but it’s not.

“It’s not even the physical exhaustion that the sleep deprivation batters you with, or the emotional turmoil, or the toll on the mental health of your family, or the dumb arguments, or any of that. The hardest thing about being a dad… is trying to use those stupid fucking domes sewn into every piece of baby clothing on the planet.”

I often feel like I’ve aged about four decades in the past twenty-five months and although I’ve grown a LOT, I still struggle (especially with those damn domes). 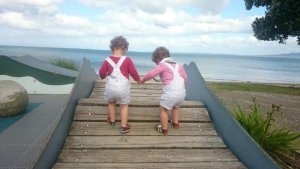