Should you get your child immunised?

I am grateful to share a post today by the incredible Dr Jess Berentson-Shaw who is a researcher and writer at the Morgan Foundation. This post was originally published on the Morgan Foundation website.  I’m publishing this post because I can’t write it. If I were to write a post under the title of “Should you get your child immunised” I’d just say “yes”. If I were to flesh it out I’d say: “Please, please immunise. I beg you”. I am the parent of a child whose trachea collapsed when he contracted a cold because the respiratory condition he was born with meant he couldn’t breathe most of the time. That day, he went into emergency surgery – it was one of the worst days of my life. He was just a baby. If he’d caught whooping cough – he’d be dead. That’s it. I have written about it – kind of – it’s so hard to write about. I have written about the agony of seeing your child unable to breathe on their own, and I’ve published a guest post by a dear friend who wrote with beautiful honesty about a day in the life of the ordinary heartbreak of parenting a child with severe health issues. I can speak from my own experiences. And I’ve been asked many times to write about vaccination. But I am, shall we say, compromised. I am a vocal supporter of immunisation because I want and need to protect my child, and I want and need to protect all of the children around me. It’s deeply personal for me. So I can’t write this post. But someone who really knows their shit and can approach it from a non-emotional place, based on scientific fact and logic and reason, can. I have closed comments on this post because vaccination isn’t a debate in my mind and I find vaccination debates exhausting and demoralising and deeply, deeply upsetting to me. So I’ll just say this:  Thank you for taking the time to read this and if you vaccinate your child – THANK YOU. From the bottom of my heart, thank you. From my whole whānau and all of my loved ones: Thank you! Thank you a million times over. Thank you to the moon and back and thank you to the stars. Thank you. Just thank you.

Should you get your child immunised?

A vaccination prevents an individual getting a disease, that much is pretty straightforward . However, widespread immunisation also has benefits. If enough people are vaccinated it eventually eliminates a communicable disease (a disease you can catch from someone else who has the virus) in a community, a society and eventually worldwide. Smallpox for example is eradicated worldwide.

This is known as “herd immunity”: when enough people are fully immunised (for most vaccines this is near 95% of the population), the risk of someone catching the disease and passing it to someone else not immunised is very low. Eventually the disease cannot continue to live as it cannot find enough hosts for it to breed in, and it becomes extinct. If only we could do that with rats and possums so effectively!

But a vaccination comes with risks

No medical treatment is without risks. Having an ingrown toenail removed has a risk of toe amputation, having a general anaesthetic has a risk of brain damage.

But with most interventions the likelihood of the most severe side effect is much smaller than the risks associated with not doing the thing. So there are some risks when a child is immunised, for example inflammation at the site of the injection or fever. There are even smaller risks of some more serious side effects like an allergic reaction called anaphylaxis. However, such severe side effects occur much less often with the vaccine than they would if a person caught the disease itself.

The figure below compares the risks of having the MMR (Measles Mumps Rubella) vaccine vs taking your risks with measles. If a million children had the vaccine, and another million caught the disease, then we would expect to see the numbers of complications in the table below.

Figure 1. Severe complications due to MMR vaccine and measles among 1 million children aged under 5 years. Source:  The Australian Academy of Science.

What we can say is that there is NO risk whatsoever that you will get autism from a vaccine.

This creates a prisoner’s dilemma

This combination of factors gives rise to a prisoner’s dilemma. A what? You can find out more about the classic prisoner’s dilemma (and why it involves prisoners) here. For now we will stick with the immunisation theme.

As as immunisation rates grow in a society (as they are currently in New Zealand), the risks of contracting a disease lessen,  as do the overall risks in a population of being hospitalised or dying from that disease. So if enough other people are immunised, then it might be rational for some people to take the risk and and choose not to vaccinate their child. In other words, if the chances of their child contracting the disease are low, the parents might choose to avoid the (also low) risks associated with getting the vaccination. 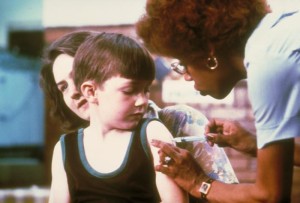 Example of a Prisoners Dilemma

For simplicity, let us pretend a community has two undecided and unrelated parents, Andrew and Brian. They have herd immunity explained to them, alongside the risks of the vaccination for measles, the risks of contracting the disease and the risks of hospitalisation or death if their child gets the disease.  Each are then asked to decide whether to vaccinate their child against measles. The risks and rewards for them are as follows:

Assuming Brian vaccinates his child, it might make sense for Andrew to choose not to. And this applies in the real world – in a mathematical sense the truly rational parent (when understanding the real scientific risks, we are not talking myths here) may choose not to vaccinate, provided that enough of society has been vaccinated to provide herd immunity. In this situation, a rational parent could view the risks of vaccinating their child as much greater than the risk of their child contracting the disease. 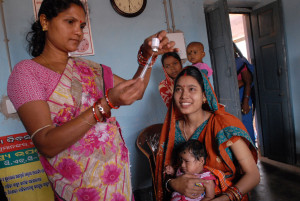 Why the ‘Free-Riders’ are hurting their kids (and others) in the long term.

You can probably see the problems in this ‘rational’ but ultimately selfish decision process, and not just for the wider community as a whole. In taking this ‘free ride’, parents who chose not to vaccinate could be harming their child in the longer term. As the vaccination rates decline (as more people choose not to vaccinate believing the risk to be low) the actual risks of contracting the disease then rise. So every child is now exposed to a greater level of risk, BUT especially those that are unvaccinated.

How do we know this? Because in countries with low vaccination rates, their rate of disease is at epidemic proportions. This interactive map shows where measles is at an epidemic rate worldwide – the majority of deaths from measles are in children under 5. Afghanistan which has an immunisation rate of less than 40% had 6000 cases in 2012 (likely to be more due to poor reporting mechanisms).

And just in case you think this is a developing world problem, in New Zealand in 1991 our immunisation coverage rate at 2 years was less than 60% overall, and only 42% In Maori and 45% Pacific children . In 1997 we had a large scale measles outbreak, there were 2169 cases notified, near 100 people hospitalised and 7 people died, four of those who died were children who were not immunised(Ministry of Health Immunisation Handbook, 2014). As we will see tomorrow, even now we don’t have the levels of immunisation we need for herd immunity – so any parent not immunising their child is rolling the dice with disease.

If an unimmunised child does come in contact with measles for example, there is a 90% chance they will get it, and if they do get it there is a 1 in 5 chance they will be hospitalised for serious complications and a 1 in 1000 chance they will die. So if increasing numbers of parents choose not to immunise due to a low risk of disease and a comparatively higher risk of vaccination side-effects they are actually, ironically, increasing the risk of their child becoming seriously ill during outbreaks. What is almost worse is that they are putting some already really vulnerable kids at greater risk. 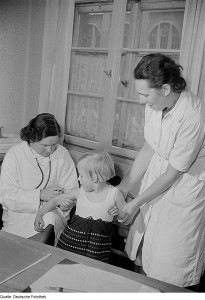 For children with compromised immunity, and in New Zealand this is mainly kids receiving chemotherapy treatment for cancer, if they contract measles they have a 1 in 2 chance of dying from it. Young babies, who have undeveloped immune systems and are too young to get a vaccination, are at high risk of contraction and hospitalisation during an outbreak of a disease. Kids in poverty who already suffer an additional disease burden compared to their better off counter parts, are more vulnerable also due to their lower vaccination rates (an issue we will go into in the next blog).  So as the rate of a disease increases due to a decline in vaccination rates, the kids that suffer from this decline are those that are least able to cope.

Only a few of us can have a free-ride and it needs to be based on need.

If herd immunity is achieved when 90-95% of the population are fully immunised (depending on the disease) and this rate is maintained for a period of time,  then the 5-10% we can carry unimmunized in our society needs to be reserved for those with the greatest need, not those who want to opt out due to illogical perceptions of risk. It helps if information about the risks and benefits, both individual and population based, are communicated effectively and people are given the opportunity to understand that their personal decision affects everyone.

In summary, having your child vaccinated helps not only your child but everyone in society. It is theoretically plausible that if enough people have their child vaccinated, it might be rational to not have your child vaccinated, given the low risk of side effects. But the more people that make that decision, the greater the risk of an outbreak becomes. And that can potentially hurt anyone that isn’t immunised. The next blog will look at the situation in New Zealand, and will expand on why the poor and sick are the ones that lose out when people choose not to be immunised.

← Dear Mamas: The podcast – episode one
One day your kids will grow up →