So happy to share this funny little post by Craig. You might remember Craig wrote a guest post about being a dad to twins. You can read that here. This should strike a chord with anyone with toddlers! I feel like I say “What did I just say?” a thousand times a day!

I was about 15 years old when TELETUBBIES premiered on New Zealand television. Although many, many years out of the show’s target demographic I watched a few episodes during school holidays and/or hooky sessions and was baffled by the surreal world of bunnies roaming the perfectly manicured hills, custard and toast machines constantly on the fritz and that omnipotent baby-head-slash-sun hybrid monstrosity that beamed messages down to the TV stomachs of those unholy creatures.

As a lad interested in film and TV production there was one thing that always bugged me about the ‘tubbies – namely it was the fact in each episode after the pre-recorded segment that happened in the “real world” the baby-sun demigod would play the exact same sequence in its entirety all over again. This felt like cheating to me – a cynical way to pad out the episode’s runtime with no extra cost involved. What I’ve come to realise many years later, is that this convention was most likely a strategic move because, when it comes to repeating stuff, toddlers bloody love that shit.

This sounds like a no-brainer – duh, of course tiny people enjoy hearing the same things / reading the same books / watching the same movies / listening to the same songs over and over – it’s how they learn! – but it has only recently hit home with me (now that the twins are two-and-a-bit years old) just how prevalent the concept of repetition is in our lives.

Like most parents with kids born in the last five years I’ve seen FROZEN several dozen times (I’ve asked NASA to calculate how many times I’ve heard LET IT GO) and I’ve long run out of fingers and toes to count how often the girls and I have caught up on the same DOC McSTUFFINS episodes, but what I’m coming to learn is that repetition runs much deeper than this when toddlers are involved.

Not only do the twins now say the same sentences multiple times in succession (pretty much everything – from “I want toast” to “Give my dolly!!!” – Ruth has also graduated from the default “no!” to the more advanced “I don’t want it!” when asked about literally anything), they just love to echo the same actions over and over (such as banging a pot lid or opening and closing the washing machine door). And like Tinky Winky et al  they will say “Again?” from their car seats as a song they like fades to a close (this led me to discover that at 1 minute 25 seconds long, the seminal Wiggles classic ROCKABYE YOUR BEAR can be played at least nine times during a 25 minute car ride).

And the best part? They don’t keep the fun of being a human broken record to themselves! No, unlike adults who will selfishly pursue enjoyable activities surreptitiously, toddlers go out of their way to ensure that parents also get to experience the joy of saying the same things over and over again!

“Girls, come sit down and eat you num-num”

*no reponse. pause for four seconds*

*no reponse. pause for three seconds*

“Hey! Stop trying to feed Connect Four pieces to the cat and sit down at the table please!”

And so it goes…

I know on some level that this repetitive life stage is helping their brain and motor skills develop and I’d be a complete sadist if I wasn’t all for that. I also know that one day the most common repeats in my life will be syndicated Golden Age SIMPSONS episodes and pharmaceutical prescriptions.

For right now I’m just glad that the Teletubbies show is defunct (until the inevitable gritty reboot at least – and maybe a spinoff movie called SUN-BABY: ORIGINS) and that, while formulaic, at least ELMO’S WORLD doesn’t replay entire sequences more than once per episode. 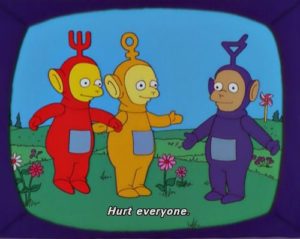 ← Fear and Loathing in Pontypandy
The mother of assumptions →