The mother of assumptions

I can cope well enough with some of the ridiculous feedback I get on my posts. The people (let’s face it – the men) who send me their thesis Everything Wrong With Your Article That I Don’t Care About At All…

Here’s 287 bullet points about how I don’t care at all about what you said. A rebuttal of every line that lasts a century.

I didn’t read the article but…

I don’t have kids but…

Because I’m wrong. So wrong. And everyone knows you cannot ignore an opinion you don’t agree with. You must (it’s your duty you must) say something.

Even if all I’m saying is I’m tired they’ll say ‘Well, actually…are you tired or are you exhausted? Because these are two different things and actually….”

Those I can take. I can laugh off (or at least sign deeply) about the man who told me that the laughter of children annoys him. I can ignore the person who told me I’m raising feral kids. I can roll my eyes at the woman on Twitter who has to subtweet every time I write anything (I give her life and I sincerely worry about what will happen to her if I stop writing). I can disregard the comments that say I don’t value myself – that I am trashy and embarrassing and gross and talentless and fat (if you see a fat person you must point out they are fat, otherwise how will they know?)

I even agree with some of the things they say about me.

But I can handle those. Most of the time. I don’t like them, but after a year of abuse they’re starting to roll off me. Not really water off a duck’s back. More like washing play dough off your hands in the sink. It takes a while to get it all off, it’s sticky and messy. And you wonder why you ever fucking made play dough when it’s such a pain in the ass (I’m going off topic).

No – the thing that upsets me is the assumptions made about me by my fellow mums. The ones who also have it tough with wee ones. The ones in the same boat with me – trying to get up this creek without a paddle – or a broken one at least.

“It’s easy to say that when you don’t work and you’re just hanging out at home. Some of us need to sleep”

“You’d be grateful if you knew what infertility was like”

Sometimes I feel like throwing in the towel. Because I keep getting told we are all in this together but somehow I’m not part of the togetherness…I feel like an outsider when I read some of the comments other mums make about me. I wonder why I’m not considered worthy of the benefit of the doubt. Or why they can never assume positive intention in my writing.

The assumptions hurt. And I’m not sure how to get past them.

Anyone who reads my posts knows my kids don’t sleep. Yes kids – I have more than one (but frankly, that doesn’t matter and it’s shitty to attack people for not being tired enough or overwhelmed enough. There’s no hierarchy – If you’re exhausted the response should be, “How can I support you” not “Well you don’t have two so shut up”).

The posts you’re reading on the Herald are work – that’s my job. Along with two other jobs. Yes I work three jobs and look after my children because that’s what we do to make ends meet.

I don’t know how anyone could think I think I’m perfect given the most common theme of my blog is:

What the fuck am I doing?

Yes, I breast-fed my second son, but I couldn’t with my first son. I love formula! Yes, I had an unmedicated birth – but I’ve never called it a natural or normal birth. That kind of language is language I’ve rallied against because they seem like value judgments – as if other births are unnatural or not normal. I vote Green but that’s probably due to lack of options. I don’t recycle so I don’t know what makes me a hippy.

I tried for four years to get pregnant with my first son. I was under the care of Fertility Associates for two years and I had three surgeries – so I know a little about what it’s like to feel truly and deeply that you’re never going to have the life you feel you can’t live without. But I don’t write about it because when I was trying I hated hearing people with children say to me “I was infertile! It will happen for you!” It felt unfair – it pissed me off. And it’s not a true statement for every woman. Sugar coating fertility hurts people. So I don’t do it. I boost the voices of those women who are living that life now instead.

And I am pro-vaccination because of what my sons have been through with their health. I don’t have the privilege of being anti-vaxx. I don’t know anyone who has seen their child unable to breathe on their own who then says “oh you know whooping cough is just a cough!”

All of the assumptions people make about mothers, about each other – they stop us being able to connect. They burn down the village. They keep us lonely and isolated.

When you have little information to go on – don’t assume the worst in people. I know it’s hard – I have to actively try to stop myself. And here’s why I do:

The one thing that has keep me afloat in this whole crazy year of weirdness is my circle of mama friends. My coven. We are all really different women – and sometimes I wonder how we ever found each other in the first place.

But I’m so glad we found each other. 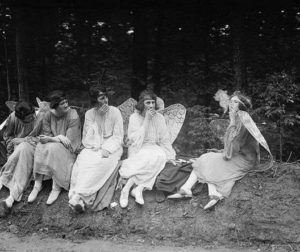 We looked past all of the bullshit assumptions that stop you from taking that step to say Hi, how are you? Is that your little one? How old?

For whatever reason they looked past my scatteredness, the awkward jumbly way I talk – my social faux pas, the way I dress (Soccer Mom Dressed as a Goth for her High School Reunion) and the fact that my foot is always protruding from my mouth.

They gave me a chance and I gave them a chance. And now we really, really are all in this together.

I try my best never to assume now. When I see and talk to another mother and my brain starts up, wanting to sort them into that kind of mum or this kind of mum (that need for order is weird and we all do it) I force myself to stop.

I remind myself what happens when you close yourself off, only see the worst. Make assumptions that put someone into a negative light so you can’t see any good in them. That darkness we created keeps us from each other.

I remember that it would be a tragedy to go through this time as a mum new in the world all alone.  That if there’s one thing I regret it won’t be the way I parented, it will be that I didn’t reach out because I was too busy assuming the worst in people when I could have opened a hand and a heart…

I stop myself. I start fresh:

Is that your little one?

18 Comments on “The mother of assumptions”