It has been a day

My day started at 4am today because my three year old thinks his insides are coming out when he vomits and he caught that bug that is going around so I woke to vomiting and screaming and he was just puking everywhere and I was gagging because I can handle poos and wees but there’s something about vomit it’s just SO MUCH. I turned on the light and it was like a horror show. And I was gagging and trying to get his PJs off and they were all slimy and he was trying to hug me and I was trying to one arm hug him because I want to comfort him but also *heave* there is VOMIT EVERYWHERE omg it was in his hair. And then he puked on me. So I put him in the shower and I got in too and I kept thinking as he puked in my arms that I’m going to get the bug too because it’s on me. And I sat on a stool that was meant to be for him and he sat on my lap and cried and puked and I stroked his hair and tried not to puke. And then the stool snapped 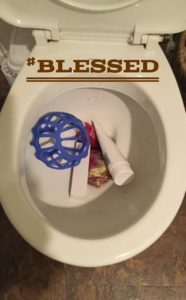 under my weight because it is made for a child and it’s plastic and not made for a giant woman covered in a three year old and a three year old’s puke. And it made a big bang. And then I made a bang as I landed on the floor of the shower. And that woke the baby and then the baby was like WHY IS EVERYONE AWAKE because usually he likes to wake on the hour every hour all night and it was 4.30am by this time so he was confused and ANGRY. So he was banging on the bathroom door because he wanted in on the vomit and broken chair and me laying on the floor of the shower groaning as my three year old said “I’m weeing” action. He also wanted to be on my lap vomiting and/or peeing on me. And he has just learned how to say mum and the first 380 times were so cute but now for 48 hours it’s just been MAMA MAMA MAMA MAMA MAMA MAMA MAMA MAMA and I was like oh. That’s right. and so he was banging on the door yelling MAMA MAMA and screaming and my big boy was vomiting and screaming and my husband was like “I have put out my back or something” and I was like WHAT WHY IS THIS HAPPENING NOW. And then I got the kids dressed and clean(ish) and my husband was hobbling around unable to help but trying to so I helped the situation by yelling at him. And then I put on Postman Pat and didn’t have a drink at 5.45am. And then I left the chundering big baby with my broke back husband and I went to get the baby’s sleep deprivation test at the hospital. And she put the little wire things on his head and he was so calm and I said “oh thank goodness he isn’t screaming!” And then he screamed for an hour. Because I said that. And she said “do you think you can get him to sleep” and I thought that was the funniest joke ever. But she wasn’t joking. And then I shushed so much I almost broke a blood vessel in my eye. In my eye. And then he fell asleep and it was so beautiful I almost cried. And then she said “ok we have got it!” And started unbandaging him and he was suddenly screaming like he was being tortured and I was like REALLY WE HAD TO WAKE HIM AFTER 10 MINUTES REALLY?? IS THAT REALLY A THING WE HAD TO DO REALLY? And then my tummy started to feel sore and I was like please if there is any type of God please do not let me shit my pants at the hospital when I’m wearing maternity leggings that are 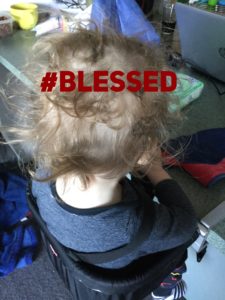 worn through the crotch anyway. And then she said “shall we wash him” And I was already half way out the door like NO BUT THANK YOU BUT I JUST NEED TO GO. And then I got outside and the feeling passed and the baby was quiet so I went and bought some baby oil which apparently is what you use to get the glue out of their hair. And then I got picked up by my hunched over husband and the big baby with a big red bowl and he smiled and said “I did so much sick out in my mouf” and my husband gave me this weak smile and I gave him a kiss on the cheek which I hope said “I’m sorry for yelling at you and I hope you’re ok but we can talk about it later because kids etc” and then the baby screamed all the way home. And then when we got home I was rocking the baby and I thought my head is going to explode and Eddie came over and said “please can I have a cuggle becorst mine tummy is so sore” and so we all got into bed -the baby, the big baby, and the bright red bowl. And I lay down with them and sang to them a little song about having gastro to the tune of Paradise City take me away from the very sore tummy where the poos and wees are not very funny. And they stopped whimpering and giggled and then they cuddled up and everything was quiet and I thought, I need to get up and write and work and do the washing and clean the toilet and make the beds fresh again and then I just…didn’t. And then I heard giggling and it was two and a half hours 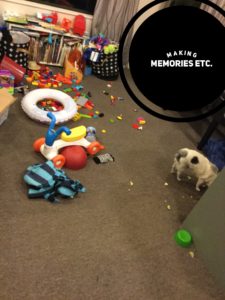 later and two blonde little cherubs looked up at me and one said MAMA MAMA and then the other started copying MAMA MAMA and I kissed them both and then I thought about all the puke and I felt really gross so I quickly got up. But Eddie said Please Another Kiss On Mine Face Dear Mama and so I did give him another kiss on each hot, pink, flushed cheek. And I saw the baby’s hair and thought SHIT. And so I got the baby oil and I stripped him down and put the baby oil in his hair and he yanked it out of my hand and it went everywhere and I tried to pick him up but he was naked and covered in baby oil and he thought this was so funny and he made a dash for it and I tried to grab the slippery naked baby and every step he took he farted and screamed with laughter and then the big one started to try to take his clothes off and said “can I be naked and cover in dat stuff too and you chased me dear mama” and I was like sweating and covered in baby oil THIS IS NOT A GAME and I threw the towel over the slimy baby and grabbed a leg but slipped again and then slipped over in the bathroom and both children jumped on me like hahaha this is so funny try to break her. And then my older one said “your tummy is like a jumping castle becorst you are so soft and bouncy” and I tried to get up and the crotch of my leggings just ripped right out. And then 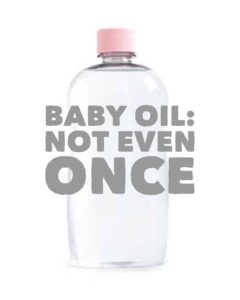 Eddie vomited on the floor. So I put them both in the shower and gave them the bottle of baby oil and they slid around in there for a while and I sat on the ground in my ripped leggings all sweaty and gross and I felt like I was going to cry and then the baby farted. And we just all burst out laughing. Hysterical, maniacal laughter. Because farts are funny. And a baby that already looks like a leg of ham covered in baby oil like a greasy piglet is funny. And even vomit is funny sometimes. And also this is life. And it’s our life. Our precious, wonderful, stupid, amazing, ridiculous life. And I never thought I’d sit in vomit in ripped crotch leggings and try to catch naked babies covered in baby oil in a bathroom that stinks of farts – and laugh this much. I never thought I’d do all those things and then still be 100% sure I’m living the life I’ve always wanted and loving it so much. SO MUCH. I climbed into the shower and sat down and my two babies climbed into my lap and kissed my cheeks and kissed each other and I thought that’s being a mum. And in that moment I thought: I am very, very lucky.

← I got sent ashes
Giveaway: Family pass to Mister Maker and The Shapes Live →