Suicide Squad review: I can’t believe I put on a bra for this 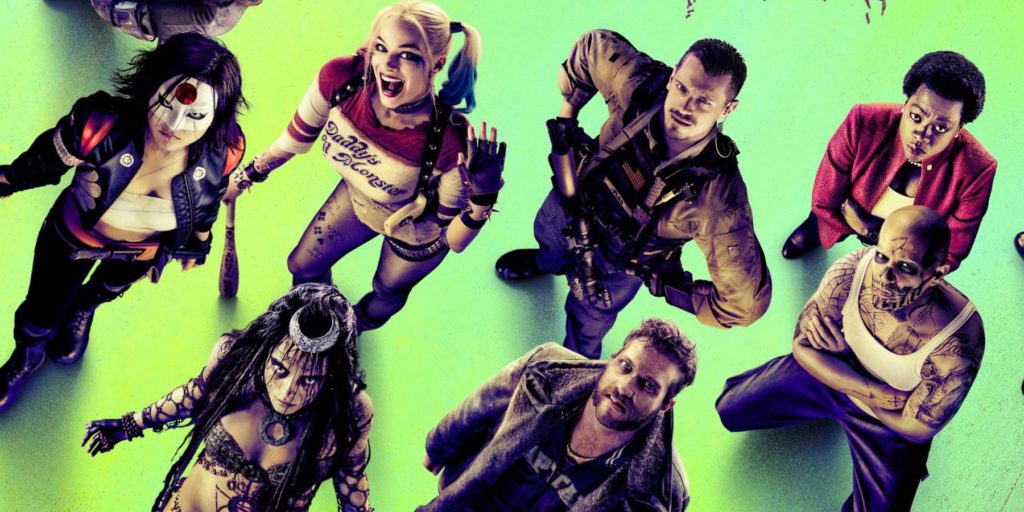 My great aunt used to say if you have nothing nice to say don’t say anything at all. But she never saw Suicide Squad. And for that I am thankful. I never thought I’d be grateful that an elderly member of my family was dead – but there you go, that’s how abysmal Suicide Squad is.

If she was somehow alive, and saw this movie, she would have immediately retracted her advice and despite never missing a Sunday at church would have said – FUCK THAT. SUICIDE SQUAD IS SHIT ON A FUCKING STICK. And even that doesn’t convey how entirely atrocious Suicide Squad is from start to finish.

How do I put this? Suicide Squad is an absolute dumpster fire. I’ve had laparoscopic surgery that was less painful. I’ve been to funerals that were funnier. I’ve seen better character development in a life-insurance commercial.

The dialogue is so appalling – I can’t even adequately describe how bad it is. STILL my attempts at describing it would be better than the actual script.

Every character (and there are at least 20 more characters than are actually needed) has a ridiculous tragic backstory. It’s like American Idol for shitty comic-book characters. Except even the worst episode of American Idol is better than Suicide Squad.

And maybe the characters aren’t meant to be shitty – I don’t know, I don’t know my Marvel from my DC or whatever it is. But really? REALLY? BOOMERANG GUY? REALLY?? HIS POWER IS BOOMERANGS??

CROCODILE GUY?? REALLY? I MEAN REALLY? WHAT DOES HE DO? SWIM GOOD AND EAT PEOPLE?? How convenient they needed someone who can swim good I mean GOT DAMN I DID NOT SEE THAT COMING.

WHO WAS THAT OTHER GUY WHO EXISTED ONLY TO HAVE HIS NECK BLOWN UP? WHO WAS HE? DID THEY EVEN SAY WHO HE WAS?

REST IN PEACE GUY WHO HAD HIS NECK BLOWN UP. WHOEVER YOU ARE. YOUR ROLE SERVED MORE OF A PURPOSE THAN THE ENTIRE MOVIE.

And Harley Quinn… I mean Margot Robbie and Will Smith are the best things about this shitpile of a movie. But really, that’s like saying an ingrown toenail is better than a boil.

Why does Harley Quinn love Joker? Am I meant to know this before going in? Could you have explained this instead of knocking her out three damn times in one movie? Like who directed this cyst of a movie? Why did he (clearly a he) feel the need to have her punched that many times?

YOU ARE BAD AND YOU SHOULD FEEL BAD. BATMAN IS MEANT TO BE A GOOD GUY AND YOU’VE GOT HIM PUNCHING WOMEN IN THE FACE WHAT THE FUCK IS WRONG WITH YOU? If you are a director and you have to show a heel turn – there are other ways to do it besides inflicting violence on women characters.

I mean when the WWE are better at turning good guys into bad guys than you – you are not good at your job.

How does she have a personal hairdresser when she lives in a fucking cage? How did she do her hair and make-up in half a second? Why are they letting her have a curling iron? Honestly like a hundred times they point out she’s crazy but by all means let’s give her a curling iron. Do you know how many times I’ve unintentionally hurt myself with a curling iron?

Why does she love Jared Leto when he’s such a repulsive douchebag? Why is he even in this movie? Is it Stockholm Syndrome? Are we meant to believe it’s love? WHAT DOES HE EVEN DO? WHAT DOES THE JOKER DO EXCEPT BE A FUCKING DICKHEAD???

That’s not even the bit that annoyed me the most in the movie.

WHY WOULD YOU GET IN A FUCKING HELICOPTER WHEN EVERYONE IS BOMBING HELICOPTERS? IF YOU HAVE A SUICIDE SQUAD WHY WOULD YOU LEAVE THEM AND GO BY YOURSELF IN A HELICOPTER? WHERE WAS THE RETURN GUNFIRE COMING FROM? THE MARBLE MEN DIDN’T HAVE GUNS?

REALLY? SHE KISSES PEOPLE TO MAKE THEM MARBLE PEOPLE I MEAN WHO APPROVED THIS? DID YOU TALK TO ANYONE BEFORE YOU MADE THIS MOVIE? HOW DOES A WOMAN WITH A FUCKING BAT SURVIVE THIS LONG? HOW CAN THE WITCH SUDDENLY SPEAK ENGLISH? WHY DOES SHE SPEAK ENGLISH? IF THE FIRE GUY COULD HAVE JUST KILLED EVERYONE WITH FIRE WHY DID HE WAIT SO FUCKING LONG TO DO THAT? REALLY AM I MEANT TO BELIEVE HE THINKS THE THINGS MADE OF BLACK MARBLES ARE GOOD GUYS WHO HE CAN’T KILL? REALLY DO YOU EXPECT ME TO BELIEVE THAT?

“What if I lose control?” – SERIOUSLY? Everything around you is falling apart and is on fire. I mean for fuck’s sake mate. Get it together. You are the only one with actual abilities here I mean JESUS MATE. SORT YOUR FUCKING SHIT OUT.

THE WITCH DIDN’T EVEN NEED THE HEART THING!!! SHE DIDN’T NEED IT AND NOW YOU WANT ME TO BELIEVE SHE DID NEED IT! HOW DID DEADSHOT HAVE ENOUGH TIME TO READ A FUCKING BINDER FULL OF SECRETS IN THE MIDDLE OF A TERRORIST ATTACK IN THE TIME IT TAKES TO WALK FROM A HELICOPTER TO THE CAR? IF DEADSHOT CARES SO MUCH ABOUT HIS DAUGHTER WHY DOES HE STOP TO DRINK INSTEAD OF I DON’T KNOW CALLING HER?????

Dear god this film almost gave me an aneurism it was so stupid. If you have to repeatedly have one character explain everything that has happened in the movie in order to make me understand your INCOMPREHENSIBLE plot and to move the relentlessly unbelievable and pointless plot  – YOU ARE NOT DOING A GOOD JOB WITH YOUR MOVIE!!!

I mean clearly I am meant to have read some comic books or something to understand this flaming turd on a doorstep of a movie. I mean Superman is dead now? When the fuck did that happen? Isn’t the whole point of Superman that he can’t die?

JESUS. I can’t believe I put my bra on to see this movie.