It’s time – time for some truth. Time for some parenting confessions. I’ll be honest, I have said a few white lies in the past, at a coffee group, to a colleague, a friend even…definitely to family now and then. It’s just sometimes I don’t want the lecture or the raised eye brow or the tilt of the head and the half smile. I am sure every parent has a confession or two. This will be our safe place, I’ll share if you do…..

Confession #1: We are co-sleepers

Look, I try to pretend we aren’t. But we are. I will say things like “Oh he mostly sleeps in his own bed” or “Mostly it’s just a visit in the morning to get him to sleep longer”. Unless if by mostly I actually mean never – it’s a fib. Because mostly he actually never bloody sleeps unless one of us is in there. And we never set out to be co-sleepers. I actually said before having kids I’d never co-sleep. My bed is a sanctuary I said. HA HA SOB. For my hubris, my bed is now not a sanctuary. Co-sleeping is the only way my youngest sleeps for longer than 45 minutes. He will cry out and reach a hand into the darkness and when he touches my shoulder or my husband’s wrist or the side of my face his body relaxes, and he goes back to sleep. If he reaches out and we are not there he screams and then he wakes himself up and then it takes forever to get him to go back to sleep. That is why we co-sleep. In other posts I’ve talked about co-sleeping, but I’ve often told people it’s only occasionally, or I’ve allowed them to believe that our youngest has grown out of it. We recently went on holiday and I didn’t put up the cot. That’s when I realised we are really co-sleepers. I didn’t even bother with pretending that he was going to at any point sleep in the cot. I should be more open about this, but lots of people who don’t co-sleep believe co-sleeping is why he won’t sleep. I co-slept with Eddie until he was almost two and then he moved into his own bed in his own room, just before Ham arrived. Eddie is a great sleeper now, and he even has sleepovers. Co-sleeping (I believe) has worked really well for him, and we are sure it will work out well for Ham too. So because I don’t want to be told not to do it, because I’m comfortable with doing it, I usually tell people he doesn’t sleep with us – but the cat is out of the bag with this post I guess.

Also, people ask weird questions about co-sleeping. Like when I once said I co-slept with Eddie I got asked “but what about y’know…” And I’m like sex? And they were like “yeah y’know”. I was literally six months pregnant when they asked me this question.

Anyway, for now though, Ham still doesn’t sleep through the night but I am OK with that.

Confession #2: I am not OK with my kid not sleeping through the night

I just lied to you. I’m sorry. I so often tell people I am OK with not ever getting sleep. I always say things like “yeah, I’ve accepted that Ham is just not a good sleeper”. I have not. I am really fucking shitty about having two babies that don’t sleep. There I said it. It’s bullshit and it’s not fair and I want a baby that sleeps. Damn, that felt good! I tell people all the time that It’s just the way it is and I’m alright with it. NOPE. The other day I saw one of those pictures on Instagram – you know one of those typography things – some baby book milestone app thing. The baby was sleeping and it had the baby’s name and weight typed over it all pretty and under interests said something like pottery and fascism (I can’t remember) and it also said “Sleeping through the night at eight weeks” and for a brief second (not that brief) I just saw this red mist? Is that weird? I wanted to kind of punch a wall? That’s not weird right? Don’t answer that. I honestly am so fucking annoyed that my kids don’t sleep and that I’ve tried everything and just THIS IS IT. And I’m so fucking annoyed other people get two or three fucking kids who sleep all fucking night from TWO FUCKING MONTHS OLD WHAT THE FUCK. And sometimes I see those posts where people are all Oh I’m so bored my baby has been sleeping for a week and a half and I just want to wake him up! And for a second I just actually put a hex on them. Not a really bad curse. Just, I silently pray that they will pour some cereal into a bowl and then pour the milk but only a tiny bit will come out and the carton will be empty and it will be too much milk to save the cereal but not enough milk to eat it. Or I wish that they will go to the store and their favourite brand of cereal will be temporarily out of stock. Yes, my spells are mostly breakfast related don’t judge me.

I just feel real sadness that I won’t ever know what it’s like to parent without being severely sleep deprived. I really wish I knew what it was like. I wish I knew what type of mother I would be without bags under my eyes and a dull headache. Would I be calmer? Patient? Would I be a much better mother than I am? Would I be a better wife, a better daughter, sister, and friend? Would I be a better volunteer, a better community member, a better writer? I feel sad. And so I lie. I say I’m not that tired and I say I am fine with the fact that my kids don’t sleep. I am convincing myself so that I can adjust to my reality and eventually, hopefully, make peace with it.

Confession #3: We don’t ever eat as a family and I don’t give a shit

And yes, I’m always going to lie and say we do. I get it, eating as a family is important. Yes. Fine. I concede this is true. But it is also significantly more stressful than not eating as a family for us right now. The baby eats first in a high chair. Our dining room table is covered in 128 loads of washing. My oldest does not eat with any kind of distraction. He would love it if we sat together encouraging conversation. Because then he could talk and not eat. Look, I’ve seen that ad. I’ve seen where they ask the kids who they want to eat with and they’re all MUMMY AND DADA and that’s cute but also I don’t care. Logistically I need to eat my food quickly so I can handle the youngest who just threw an entire pot of yoghurt on the floor while my husband coaches our son saying “just one more spoonful please buddy”. We are working on ways to make dinner time less stressful but right now this segmented regime of splitting up the children and assigning one adult to each one to make sure they both have something in their bellies before bed time – it works and it is the least stressful way to eat. Yet I will always tell people we eat as a family because we do – umm sort of. I mean I eat the bits left over on their plates or the parts Eddie doesn’t want while standing and trying to catch falling food (which I also eat). So we kind of do eat as a family. I mean I get why people who have grown kids are always like EAT AT THE DINNER TABLE blab la bla. I mean they have fond memories that are very removed from the realities of two under three because they’re reflecting on something they did 20 years ago. Also they’re all about conversations at the table as if the table is some designated talk zone and nowhere else in the house is a place where you can talk. We have our conversations before bed. Snuggled up warm. Sleepy tired eyes closing as we recount the day. Free from distraction we talk about who we helped that day. How we can help others tomorrow. What our favourite part of the day is. Who was our best friend today? Who loves us? Who makes us happy? Can there ever be a dolphin that is also a firefighter and do dinosaurs smile and what would happen if you didn’t have a face (what is it with the weird shit kids come up with). It is relaxed and loving and gentle and it doesn’t feel forced. Eventually those conversations will move to the dinner table but the fact is dinner right now for us is just GETTING THE FIRST BORN TO EAT and STOPPING THE SECOND BORN FROM EATING EVERYTHING. So rest assured not only are we talking but the oldest is very rarely not talking. But all of that feels like justifications for something I don’t feel guilty about so instead I just say “mmm yeah eating at the table so important yup definitely….”

So there you go. My confessions. I’d love to hear yours. I know some of these you might think are ridiculous. Maybe you think I’m silly for not just being out with them – and you’re kind of right, which is why I’m putting them out there. We are our own worst judges and even though I don’t feel guilty about any of these…maybe I do? Maybe it still feels like I have a picture in my head of what a good mother is and I’m still trying to be that image. Maybe it’s time to put pencil to paper and redefine her. Draw her so she looks a little bit more like me, so I can be a little kinder to myself. 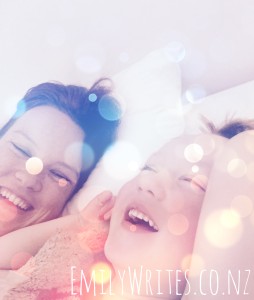 38 Comments on “The confessional”