Put down the pitchfork

I wasn’t going to write about it. It seemed everyone else had written about it. I made a passing comment on Twitter and my mentions became unmentionable. Inevitably the suggestion that I don’t love my children popped up, by a mother of five no less…

I thought – that serves me right for talking about it. Even in the most gentle way. I’d simply said I wanted to hug the mother of the little boy who fell in the gorilla pit. I’ve thought about her often since the event. I am scared for her. I’m scared for her physical safety. And I’m scared for her mental health.

Often I find myself feeling overwhelmed by the few horrible comments I get on Twitter or in my inbox or here in these comments. The ones that say “I feel sorry for her kids” because I made a comment they didn’t agree with. It’s the easiest insult because it hurts the most.

But what would it feel like to be the subject of memes where they use racial slurs against you and say you should be shot? What would it be like to have other mothers screaming that your child should be taken away? What would it be like to hear there is a fucking petition to try to get all of your children removed from your care? To read over and over and over again that you’re a piece of shit. That you’re neglectful scum. That a gorilla is a better parent than you?

What would it feel like to have your entire life as a mother erased in an instant? Every kiss goodnight, every lunchbox prepared, every game of peek-a-boo, every blanket tucked in, every cuddle, every hand pressed to a fevered forehead? All gone.

When would all of those horrible, hate-filled voices become your own? As you recover from the most traumatic and terrifying thing you’ve ever been through? As you try to parent through this?

I wouldn’t be able to cope. No way.

And I’ve looked at all of this – this hatred and hysteria – and I’ve felt a deep fear.

If you think you could never be that mum you’re wrong.

Any misstep you ever have as a parent, any moment as a mother, any time you are less than perfect – you’re at risk.

If someone sees you, if something happens – you could face what this mum is facing now.

Because this is the society we are living in. The braying mob is waiting. They need women to tear apart and mothers are great for this.

And they’re ready to catch us and begin the punishment.

This isn’t about a gorilla. It’s about the need for a mother to be publicly and seriously punished for not being perfect.

And race absolutely does come into it. This will be a far harsher attack because this little boy’s mother is a woman of colour.

And every time we say “that would never happen to me” we’re putting another stone on the pile. Ready for it to be flung at her. To cause as much damage as possible.

When you say “that would never happen to me” you’re really saying:

Dear god, I hope that never happens to me.

When you say “I have five kids and I never turned my back on them once” you’re really saying:

I have to imagine that this isn’t something that could have happened to me.

Because of course you do. It isn’t as fun to tear another human being apart if at the back of your mind you know that it could have been you.

This is the same reason why women disbelieve other women when they talk about rape. If you believe it doesn’t happen often or at all, that it’s an anomaly – this violence against women – you believe that it won’t happen to you.

If we judge others. We might not be judged.

If the crowd is busy hanging this woman. They won’t see my inattention or my imperfection or my failures and attempts and fuck ups.

But they will. It’s luck of the draw.

And if it happens to you – they won’t care that you were one of them the month before when someone else was being punished.

You won’t be one of them then. 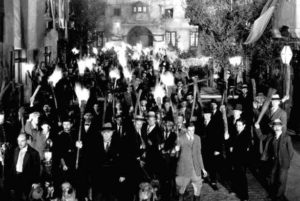 And what does this do to us a society? When our default isn’t support for mothers and care and empathy and compassion? When we don’t ever even attempt to understand the nature of children? When our default is hatred and seething madness? When people are frothing with excitement when a mother fucks up?

It was hard enough when as a parent you were concerned about what age you should start solids, whether your child was getting enough sleep, if they were reaching milestones…

It was even harder when you had to deal with everyone having an opinion on everything and that was difficult when it was people you knew.

Then it became people you didn’t know who for some unknown reason really cared about whether you breastfeed or bottle feed your baby and what type of car seat you have and is that a jolly jumper?!? And then there was how you get them to sleep – the only thing you can be sure of there is that you’re doing it wrong.

THAT was bad enough.

And now you add infamy and weeks of public flagellation and death threats and petitions.

What impact does this have on mothers?

We’re trying to build villages and they’re being burned down.

What can we do?

DON’T PICK UP THE FUCKING PITCHFORK.

When you start to say that would never be me consider if that’s really true.

Cuddle your baby. Finish the washing. Go back to work. Call a friend.

We probably can’t end this mum-shaming and this hatred of women. But we can at least not participate in it. We can at least extend a hand to those who are being destroyed and say:

It could have been me and that scares me – but I won’t join in and I want you to be OK.

We are not different you and I. Don’t let fear divide us.

← The Just Fucking Doing It Club
Giveaway: The ultimate Disney On Ice experience →

16 Comments on “Put down the pitchfork”