I am grateful, now fuck off.

It was some time between midnight and 3am. I was dead asleep. I’d fed the littliest at midnight so it was after that, and it was before he woke up for a feed at 3am. This hardly matters, because that time of night is Hell unless you’re pashing, happy drunk, smoking in a bar, dancing, or on drugs – y’know, generally having a fulfilling life that doesn’t involve milk dripping out of your breasts or playing the fart or shit game.

So, I’m asleep and I feel this tiny hand on my face and then there’s a kiss on my forehead. And for a second I’m confused like – did the tiny one do that? He’s only four-weeks-old? Is he a mutant? That would be amazing.

And then I realise it’s my big baby and I pull him into my arms while still asleep and think “oh he’s delicious”. But then he elbows me in the tit and says “JAY JUNGLE MAMA” and I’m like “ughhh fuck you’re not delicious at all. What is that smell?” And I tell him to be quiet and I cuddle him and he says “NO JAY JUNGLE” and he climbs onto my chest and it hurts so bad because my boobs are about to explode. And then I cuddle/smother him and spend the next 40 minutes or so (who knows how long it was – it felt like days) getting him to sleep. And then I got him to sleep and I got up and I went to the bathroom and I came back to this: 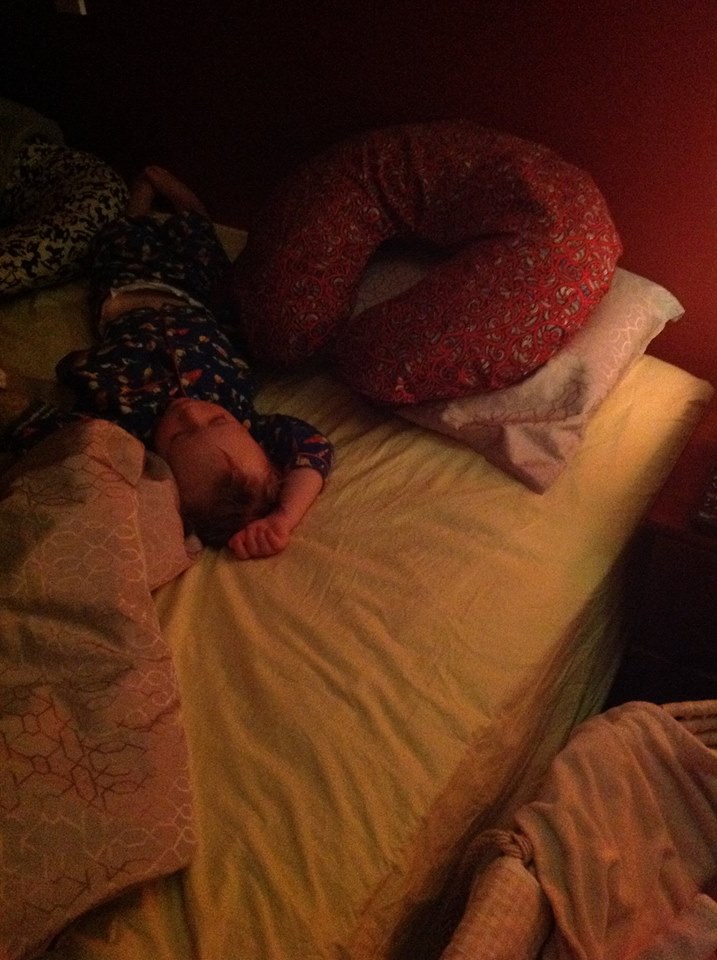 And I was like “FUCK THIS SHIT IT’S MY BED. WHY ARE YOU EVEN UPSIDE DOWN? WHY CAN’T I HAVE ONE SPACE THAT IS MY OWN? WHY ARE YOU ALMOST THREE AND YOU SLEEP WORSE THAN A NEWBORN? WHY IS THERE NEVER ANY ROOM FOR ME??”.

And even though this was an internal scream the little one woke up angrily demanding a feed. While feeding on the floor I took a photo and I put it on Facebook and Twitter. And on Twitter I said ‘sigh’ because the parents on Twitter get it. And on Facebook I did a slightly longer comment because I was trying to be a bit light hearted because…well, we will get there…

So, I said “How come it’s my bed and there’s never room for me in it?” Which you’ll note is not “FUCK THIS SHIT…” It was meant to be funny, a way for me to be like “see?” without being like “OMG KILL ME SEE?” And then I got this message, which I fucking always do, from a friend’s mum. It said: “Be grateful for your boys. They will be adults before you know it and they won’t want to sleep with you. You should enjoy this time”. And I was like OK, I hope I’m never so unstable that when my sons are in their 20s I want them sleeping with me. But aside from that – CAN YOU NOT?

I know the first thing I’m going to be told is “people are just trying to be nice! They’re trying to comfort you”. Yeah, yeah, it’s hard to be charitable when you’ve had two hours sleep. Here’s the deal – trying to be helpful or not – it isn’t. It isn’t helpful. It’s condescending, patronising, and it’s actually (without being melodramatic but maybe a bit melodramatic) it’s dangerous.

Constantly telling parents – Be grateful! Be grateful! One day they won’t be shitting on you! And you’ll be like “omg, I long for the days when I was covered in sour milk and diarrhoea!” So – be grateful! You might be so exhausted that you’re crying on the toilet but these are the best days of your life SO BE GRATEFUL – leads to those parents shutting down and never sharing how they truly feel. It leads to parents not having support networks. It leads to parents walking into parenthood without any idea of how hard some moments, some days, can be. It leads to such unfair expectations on parents – enjoy every minute or you’re a fucking monster. It leads to feeling like you’re doing it all wrong.

These comments always come from people with grown kids. And I get it. Maybe? I mean when the boys are in their 20s I might be wishing they still lived with me and needed me 24-7. I mean, I kind of hope in my late 50s I’m acting like I was in my early 20s – boning their dad, drinking bourbons, going to gigs, spending all my money on band tee shirts and fast food. But I digress – I get it kind of. Your kids are grown, you miss them, you see parents at the beginning of their parenting journey and it makes you nostalgic. I get that there’s no malicious intent.

But just again – can you not. Because when I make a heavily sanitised comment about not sleeping and you make a comment about being grateful, it implies I’m not grateful. And in my sleep deprived state it makes me feel like an asshole.

Update: wow! I’m really overwhelmed by the response to this post. Thank you so much for all of your comments. I wish I could reply to every one – but I’m typing one handed because cluster bloody fucking feeding. But thank you – I feel less alone and I hope you do too. Also, I love the idea of #iamgrateful!

If you liked this, follow me on Facebook for more of the same. I’m on Instagram too! If you really liked this or any of my other posts and you want to support me you could put my name forward for events or get people to commission me for writing or you could make a one off donation or support me through my Patreon account. If you’ve supported me by sharing one of my posts, making a comment, or making a donation – I can’t ever thank you enough. Ngā mihi nui. E x

I am grateful and… →