I saw Tarzan and this is my review after some wines

So I had wine and I am very tired and so I am a bit tipsy but I saw the Tarzan movie so I thought I’d give my honest review.
Excuse typos because you know, wines. 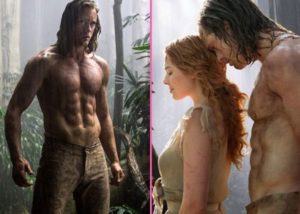 Ok so I don’t know what the plot is or who is in it other than Alexander Skarsgard and Alexander Skarsgard’s magnificent holy abs. I don’t know what the dialogue or acting is like or whatever.
But like 1/3 of the way in Alexander Skarsgard is going to fight a gorilla for some reason and he takes off his shirt and OMG LIKE I ACTUALLY GROANED LOUDLY.
He does not put his shirt back on for the whole movie.
And like The V. sweet mother Mary the V I am telling you. The v is worth $15. The V is worth so much I wanted to see the movie again straight afterward.
Did I say that he doesn’t put his shirt back on?
This is why I can’t tell you what the movie is about. Samuel l Jackson at one point is talking about something really important and it’s just white noise because Alexander Skarsgard has the best body that ever existed.
I am basically exhausted from being in a constant state of arousal for the rest of the 2/3 of the film.
When he swings on stuff it’s slow mo and there are like all these long shorts of his muscles.
And like at one point he is wet. Like so wet. And I was like to my friend OMG and we were both like HE IS SO WET. And glistening with his chest and his abs and his arms and he’s all dirty and the V. THe V I am telling you.
Some stuff happens I don’t know. But the important thing to know is that he doesn’t put his shirt back on and he’s really wearing those pants.
And his eyes. He has such puppy dog eyes. If I was with Alexander Skarsgard I would be like what’s wrong Alexander Skarsgard because he always looks so sad. And then he would say – nothing because you’re my wife. And then we would bang.
There are many close ups of his sad eyes.
There is one sex scene that stops before anything properly happens which made me so angry I intend to write to the director to give him a pieces of my mind.
I mean why the fuck is this movie pg13. What mum is going to watch this movie with her kid. Nobody wants to sit with their teenage son while they’re imagining Alexander Skarsgard diving into their lady parts.
I am furious.
But also very grateful. For this wonderful movie. That gave us Alexander Skarsgard. He is a gift to the world. And I bet he is so nice.
And he is SO TALL.
Like this movie really shows his tallness.
Like so tall. That at one point he comes up behind whoever the actress was and I let out this like guttural noise like I was dying and the guy next to me gave me a filth look and I was like fuck you what are you even doing here.
Alexander Skarsgard is Tarzan and he belongs to the women of the world.
I am an atheist but there is the point where he swings onto this other thing and catches his like “wife” (this is not a spoiler you’re not watching the movie for the plot ok) and like his muscles and his v and he’s so strong and tall and I actually like think I saw God?
So in short, definite Oscar worthy movie with just like amazing arms and imagine if your job was to put the dirt and blood on his arms? Imagine if that was your job. To just touch Alexander Skarsgard all day. And he would flirt with you but not be gross. He would just be a total gentlemen and maybe you’d drop your make up brush and you’d both reach down and get it and he’d look at you with his sad eyes and you would be dead.
That would be it.
You would actually die.
But it would be worth it.

This has been a review by Emily after two maybe three wines on very little sleep. Thank you and good night.

If you liked this, follow me on Facebook for more of the same. Also I have a book coming out and you should buy it. If you want me to speak at your event email me at emilywritesnz at gmail dot com. if you want to be a jerk and say mean stuff to me or send me a photo of your pitiful chode or tell me I’m a reverse sexist or I’m disgusting for having sexual thoughts when I’m A MUM you can email me at go fuck yourself dot com.

If you really, really liked this or any of my other posts and you want to support me you could put my name forward for events or get people to commission me for writing or you could make a one off donation or support me through my Patreon account. If you’ve supported me by sharing one of my posts, making a comment, or making a donation – I can’t ever thank you enough. Ngā mihi nui. E x