Do I have antenatal depression?

This is a post about anxiety and depression. It might be triggering for you if you’re currently struggling with your mental health. If you read this and it strikes a chord with you or you think you might need help – please see your midwife or GP or if you’re in New Zealand call Healthline on 0800 611 116. This is just my journey, every one has a different journey. It’s scary to post this publicly so please consider that before you comment.

I wanted to write this post because the post I wrote last month about my journey through antenatal depression (also known as prenatal depression) has seen my inbox fill up with emails from parents and the people who love them.

I’m grateful for every email and message and tweet and Facebook comment I get about my posts. I feel particularly honoured that parents want to share their experiences with me – especially on a topic as painful as this one.

Most of the emails I get ask two questions:

Do I have antenatal or prenatal depression?

Does my wife or friend have antenatal or prenatal depression?

To catch you up, if you didn’t read that first post, I believe I had mild antenatal depression with my first pregnancy, but I had severe, diagnosed, antenatal depression and anxiety with my second. It was devastating and debilitating, and to this day, even though I know it was an illness that I didn’t cause – a horrible bolt of lightening that I just had the no-good luck of walking under – I feel terrible guilt. And I work really hard to remind myself that this guilt isn’t helping anyone.

Antenatal depression is a thief. A thief of joy. While other mothers feel full of hope and wonder and anticipation when they’re pregnant – mothers with antenatal depression often feel a sense of dread, desperation and fear. There is little celebration in your body changing, the swell of pregnancy, every curve and stretch: It feels more like a wake.

I wanted to be pregnant more than anything in the world. Yet when I was pregnant I felt out of control, overwhelmed, unable to keep my hormones and emotions in check. After four years of trying to get pregnant with my first I wondered why I felt so dull around the edges. Why I wasn’t more euphoric like I imagined I’d be. My second pregnancy was far worse.

But that’s not true. And it’s not fair. Would you say that to someone you love if they became physically unwell during pregnancy? You wouldn’t. But the stigma in being mentally unwell is strong. When I first published that post on my antenatal depression I felt terrified. I was so anxious. What would my friends and family say to me? Would people attack me? Suggest my children should have been taken away? My fears were unfounded, and something else happened too…

I started getting emails and messages. Stories from women who had suffered in silence but also those who were suffering now. And needed help. I read emails from women and their partners talking about how they’re going to get help. And that made me realise it’s important to share (seconded by lessons from earlier this month).

So – I want to answer those questions. And talk about ways you can support pregnant mothers and see early warning signs that could be antenatal depression. I’m not a mental health expert – and I would love to run a campaign with a group with that expertise. But in the absence of that, I thought I’d just write about my experience. And this is JUST my experience – I’m not giving medical advice here. I’m just saying, if you read below and recognise yourself or a friend, reach out to them or a medical professional. Please, please reach out.

If you’ve been through it – please share (if it’s not too painful for you) in the comments so others can see what depression looked like for you. You could save a life.

This is what antenatal depression felt and looked like to me:

Anxiety – I felt really anxious through most of my pregnancy. Often we think of antenatal depression and postnatal depression as just about being ‘sad’ or having ‘the baby blues’. Anxiety is very rarely talked about. It’s a HUGE part of antenatal depression and can also sit on its own outside of depression. If you’re constantly worried and fearful and your mind is racing over possible things that could go wrong – it could be anxiety. It’s normal to worry about labour, or worry about sleep once baby is here, or whether you can breastfeed. It probably isn’t normal to worry about having a stillbirth most days, or worry that you’re going to die in labour a lot. Which leads me to:

Catastrophic thinking – If you’re lying in bed till 2am imagining your husband trying to cope with raising your child on his own because you’re convinced you’re going to die and your baby is going to die, that’s a bad sign. Catastrophic thinking is thinking the worst but it is that – magnified. When the baby didn’t kick, he was dead. When he kicked too much, I imagined he was choking, when I had a cramp, I was dying. Not being able to reign yourself in and say “I’m being silly, it’s probably fine” is a sign of catastrophic thinking which is a symptom of anxiety, depression, and other mental health conditions.

Anger – I felt very angry a lot of the time. I had an incredibly short temper with everyone around me. I felt positively hostile for a lot of my pregnancy. It’s understandable when you’re exhausted and having physical symptoms from pregnancy to get pissed off with people. But rage could be a sign that maybe things aren’t right.

Dulled senses – I often felt like I couldn’t feel anything when I was at my worst. I felt like I was in a fog. Like my life was in slow motion. I wasn’t excited about anything. Good news didn’t feel good. Bad news didn’t even feel bad. I just was. I was in a room but I wasn’t present. Numb. I couldn’t feel much of anything. And I didn’t feel particularly connected to the baby growing inside me. This was a sign for me that I was unwell.

Guilt – Feeling guilty all the time is a sign of depression. Being convinced you’re already a bad parent isn’t healthy.

Listen to the voice in your head and if she’s talking shit – stop her.

Do you ever say any of the following statements?

There are heaps of normal questions parents might have when their lives are about to change – but it’s the language and weight of those questions that you should keep an eye on. Being a bit scared of labour is normal. Feeling incapacitated because you’re so terrified of labour that you can’t even think about it without getting a racing heart or crying isn’t.

Thinking about what kind of parent you want to be is normal – and good (really good)! Knowing you’ll be a bad parent – not good. Because you don’t know. And it’s hard to recognise that. I had a child, and while I don’t think I’m the best parent out there, I do OK. My son (an only child then) was happy, healthy, loved (still is) – so I had no reason to totally believe with all of my heart that my family was better off without

There’s nothing wrong with you if you have it.

Think about all of the hormonal changes you have during pregnancy – oestrogen and progesterone rise and rise and rise. Think about the deficiencies in minerals such as iron and zinc that you have – how your midwife is always telling you to take this supplement or that one.

Now think about all of the very real things you have to worry about when you’re pregnant – can you afford to raise a child? Do you have support? That’s just the practical stuff before you get into – what kind of parent will I be? When we are pregnant we think about the way we were raised and any baggage from that we might have – of course if you’ve been abused, you can be triggered just by thinking about childhood as a concept. Infertility can trigger depression. Your workplace might be shitty – you might not have job security.

When we are pregnant we have everyone giving their opinion on anything. You can’t smell a coffee without someone saying caffeine causes this or that. Did you look at sushi? DON’T YOU CARE ABOUT YOUR UNBORN CHILD? People want to touch you. They tell you horror stories about pregnancy, labour, parenting.

Add to this – the physical. I vomited every few hours. My depression was probably caused by (or at least severely exasperated by) lack of sleep. I vomited every two hours. There wasn’t much to enjoy to begin with!

Is it any wonder that this is a time when our mental health is at risk? Of course not. Be kind to yourself!

Antenatal depression affects one in eight women. You’re not alone.

It will feel like it. And it’s scary and horrible to ask for help. I really thought my kids would be taken from me when I asked for help. But I’m so glad I reached out.

If you’re reading this and you recognise these symptoms as your own – talk to your midwife or GP. If you recognise them in your partner – talk to them. Ask them about how they’re feeling. Suggest seeing your GP or Midwife together. 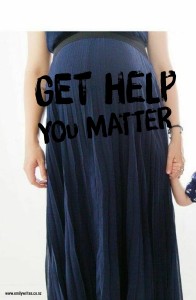 What’s the worst that can happen?

What’s the worst that can happen if you don’t get help?

I got help and I got better. Way better. Really quickly. I’m stronger now for having gone through this. And it wasn’t the terrifying ordeal I thought it would be. I wasn’t taken away by force. My children weren’t taken from me. I wasn’t sedated. I recognise my privilege in this – and that I live in a country with free health care and I think a good maternal mental health system (at least in Wellington – my experience was positive).

Treatment for me was simple and easy and didn’t take long. There are lots of ways you can immediately begin to treat antenatal depression – my only regret is I didn’t do it sooner. As soon as you start to notice any of the symptoms above, talk to your midwife. Nip it in the bud. If all of the symptoms strike a chord with you, it’s not too late to get help. Even if you’re in your last week of pregnancy.

Get help. You’re worth it. You matter.

24 Comments on “Do I have antenatal depression?”