Before I was his mum

Oh, I was such a great parent before I had kids. I knew exactly how to parent.

I was supermarket tutter (I would never give my child a kinder surprise just because they asked for it), I was a smirker on planes (I would never put a child on a plane late at night – I mean you’re just asking for trouble), I was a eye roller over my latte (my child would be well behaved in cafes!)

And I was so breathtakingly wrong. I don’t even know where to begin. Here are some of my dumbest pre-kid ideas:

No screen time for my babies!

Don’t you know? Screen time is The Worst. You may as well let your child play with broken glass covered in wasps. It’d be safer. Kids turn into zombies in front of the TV. Get them outside! Get them in NATURE.

Fuck nature. It’s always fucking raining. The fact that TV turns kids into zombies for five seconds is the whole point. That’s what you want so you can make them a nourishing meal for them to throw on the floor.

Which brings me to my next DUMB IDEA.

They’ll eat what they’re given and they’ll stay at the table until they’re finished!

I will not be pandering to my toddler. If he won’t eat what has been made for him he’ll go to bed hungry. He needs to learn that we are not his servants. I was forced to eat my veges and he will too.

We are his servants. He can eat whatever he wants as long as it’s something. Because not eating means waking us up at 2am then 3am then 4am then 5.30am because he wants 600g of luncheon. Just luncheon. Nothing else. He wants the worst not-even-meat there is. He loves that crushed up every-part-of-the-animal crap. It’s better than cheese. Which he will also eat if it’s just cheese on its own.

Pre-kids I knew how to deal with picky eaters – you force them to eat. Whatever is in front of them. Then they won’t be picky.

Except that when you’re actually staring at your child you actually can’t force them to eat because you realise how messed up it is to force anyone to eat when they don’t want to. Don’t get me wrong I’ve thought about it. And I once made him cry when in frustration I said “For God’s Sake JUST EAT”. Not my best parenting moment.

A stressed out dinner time is not what we want. He picks up on it, we feel shit, and he doesn’t eat. So we don’t push it.

When he’s 30 he won’t still be eating luncheon. In all seriousness, it feels like a long-game. I don’t want him to have messed up attitudes toward food. We grow veges together as a family, and we cook them up and eat them – or he picks beans or cherry tomatoes straight from the garden and eats them raw. You win some, you lose some. Some weeks it’s all plain rice crackers and cucumber. The next it’s eating 4/7 of the meals made for him.

Now the next one is ridiculous.

I want the lounge to stay ours.

I don’t want us to be one of those houses where there’s just toys and shit everywhere. The lounge is an adult space. I want a basket of toys (wooden, heuristic, just a few – kids don’t really need many toys) that can be slid under a coffee table or something. Out of sight, out of mind. Then we can have time not being parents. You know, in the evening, after they go to bed at a reasonable time. We can have a glass of wine and toast what great parents we are. 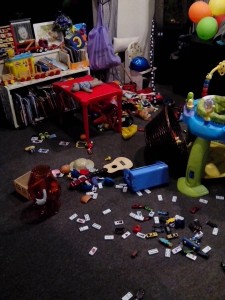 The balloons are from a party about a month ago.

Shit is it that late?

The only wooden toys we own are the ones I bought when I was pregnant with my first. Eddie picked them up once. And then put them back down again.

Yesterday, he played with those awful fucking Countdown dominoes for an hour and a half! And still – many, many months after I put all his Countdown cards on Trademe in a fit of rage – he asks me for his “faveybit cards dear mama? Wea they gone my mama?”

I will never have my kids in bed with me. They’re meant to be in a cot.

*wheeze laugh that turns into sobbing*

I will never let my kid into the toilet while I’m going. It’s weird. I don’t understand these parents who let their kids watch them.

Aged 3 months: Peeing and holding a screaming baby because the decibel level is slightly lower when you’re holding them compared to when they’re on the floor. Internal monologue: I am so tired I think I’ve forgotten how to pee.

Aged one and a half: Door suddenly opens to ecstatic toddler looking like a teenager that just found their parents’ booze stash. External monologue: HOW DID YOU OPEN THE DOOR?!?!

Aged two: Toddler playing at your feet. Occasionally staring into bowl. THERE IS NO OTHER MONOLOGUE BUT TODDLER MONOLOGUE: Why you pee dear mama? Why? Why you down like dat? Why you sit? Wea you bum is? Wea you toilet? You nee paper? Me see? Me see you bum? Mama? Wha choo doin? Wha choo doin now? (It’s still a monologue because you’re not even able to answer)

Aged almost three: External monologue: My darling! Mama is going to the toilet! Come and see! Everybody poos on the toilet because pooing on the toilet is so fun! Look! Do you want to poo on the toilet? Digger drivers poo! Elsa poos! Ballet dancers poo! Bob the Builder poos! Nanna poos! Teddy poos! Everybody poos! *slightly hysterical now* EVERYBODY POOS OK?!

My kids are going to listen to real music

No they’re not. They’re going to listen to Let it Go a thousand times a day and you’re going to deal with it.

I like to think most people aren’t as moronic as I was pre-kids. I really had lots of ideas that disappeared along with my waist and ability to sleep seven hours uninterrupted. But the biggest one for me was this one:

Having children has been the most profound and incredible experience of my life and it has changed every little and big bit of my being. Every bit.

Holding my baby for the first time shattered me into a million pieces, quickly reordered by his first breath into someone willing to lay my life down for him a million times over.

Seeing my husband curled around our babies, rocking them to sleep and humming gently, swelled my heart until the blood rushed into my cheeks. A warm glow I still feel every time he lovingly cuddles them back to slumber.

My son’s first surgery ripped me into shredded ribbons that I quickly threaded back together ready to be the whole person he needed when he came back to me.

The first time someone said something hurtful about my child – turned my spine to ice, set my bones to concrete, my blood to fire.

When we held our second baby in our arms – who knew it would be that same crushing feeling? That overwhelming almost painful joy?

The pride that makes me feel bigger and stronger than I am when I see our little boy show kindness and compassion for others. That wonder – How on Earth did we get so lucky?

And all the little times we reassess and change or decimate or ignore the silly little ideas we had on what kind of parents we thought we would be – almost every hour, always every day. The values stay the same – we want kind kids that feel safe and loved. But all the little ideas are blown away by an imaginary leaf blower, powered by a little boy who is almost three and knows a lot more than his mum a lot of the time.

Certainly knows more than his mum did before she became his mum.

If you liked this, follow me on Facebook for more of the same. I’m on Instagram too! If you liked this or any of my other posts and you want to support me you could put my name forward for events or get people to commission me for writing or you could make a one off donation or support me through my Patreon account. If you’ve supported me by sharing one of my posts, making a comment, or making a donation – I can’t ever thank you enough. Ngā mihi nui. E x

42 Comments on “Before I was his mum”